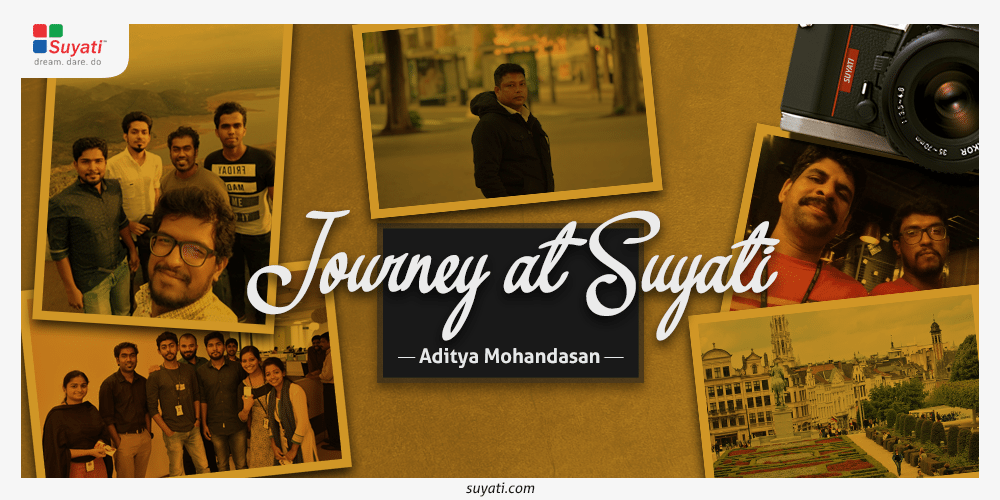 As a STEP recruit, Aditya’s career began and flourished in Suyati. We’ve seen him fresh out of college, eager, enthusiastic, jovial, and always cheerful. We took him on a trip down memory lane, to find out how his journey at Suyati is going.

So how did the journey at Suyati begin for you?

It all started 3 years ago when I was still in college – the final year – when many MNCs from around the globe had come for campus selection in our college. I attended a lot of those, but given my excellent academic performance, I did not get through into any of them! By the time it was announced that Suyati was next in line, I had sort of lost hope, and decided not to attend anymore interviews for a while. But my placement officer persuaded me to go. One thing led to another, and here I am today!

That sounds like a pretty lucky twist! How was the selection process and interview? Rigorous? Too simple?

Like I said, I wasn’t too eager on the day I attended the interview, and sceptical about how things would go. Vincent conducted a presentation before the first round, and I understood that Suyati also conducts aptitude tests, technical rounds, etc, so I didn’t have too much hope. Imagine my surprise when I got through the aptitude test! This got me a little excited and I went for the practical test. This round was pure hands-on coding, so I breezed through that and went on to the next round, the interview with Unni. This was pretty easy because he asked the same question to everyone!

Ok, we don’t want to be giving out too many tips now. Tell us what happened after that!

Haha, yeah. Given that I had been asked to reach Suyati’s office the next day, I thought I already got placed, and spent that night partying hard with my friends at the hostel. But what awaited me was a little scary – 6 rounds of interview out of which at least 4 were technical! I felt a little disheartened while I waited for the final round with Vincent. Mid-discussion, he asks me what my passion is. I didn’t know how to reply, and ended up telling him about my desire to travel. He repeated his question till all I could do was give him a bleak smile. Finally he told me that my passion should be to see myself in a better and higher position at Suyati soon. That motivated me very much, and I walked out with an offer letter in hand and a big smile on my face. I used to feel like a loser, but that one moment changed my perspective.

Wow. So the take-off was a little bumpy. What about the rest of the journey so far?

I wouldn’t say it has been very easy, but it certainly has been valuable in helping me grow as a person as well as a professional. I have been a part of at least 10 projects so far, and I make sure I get involved in every project I possibly can. I enjoy brainstorming sessions with my team mates even when the projects are not among those that I handle, because it helps me know a little more every day. I have earned the “notoriety” of being the one who hangs out at the office even after office hours. This often happens because I tend to attend to my share of the work only once I’m done “interfering” with all the projects I’m *not* assigned. Then I work in peace.

That sounds like an interesting strategy. You said ten projects. That’s a pretty big achievement!

I think the actual number would be much higher than 10, but off the top of my head, I have been actively involved in the SOCXO- Salesforce integration, Dataratti, Real D (which itself can be considered as some 5-6 different projects), and more. The SOCXO-Salesforce integration was pretty exciting. SOCXO being Suyati’s own product, working on this was very satisfying.

Talking about satisfying, did your trip to France and Paris satisfy the travel bug in you?

Oh yes! Although “traveling” was just the first thing that came to my mind when Vincent asked me about my passion during my interview, I do love to travel. But more than satisfying the urge to wander, I felt honoured when a beginner like me got chosen to represent Suyati in a foreign land. I was very happy to get such an amazing opportunity to prove myself, to give them a good impression about Suyati. Spending those two months in France was a great learning experience for me, both personally and professionally. I do hope I get to go again!

How were the two months with Aashaan (Pradeep)?

(laughs) That is why I said it was a learning experience both personally and professionally. Getting to know that your stern-looking TL can be fun to have around was indeed a revelation! We had a lot of fun, and the two months went by pretty quickly. It helped me gain a lot of insight into him as a person, and I believe it has improved the way I work as well.

What did you do there? We won’t ask for juicy details, but we wouldn’t say no either!

(laughs) I’m well aware that whatever I say can and will be used against me in Pazhampori, so I’ll keep you guessing on the “juicy details” part (mumbles something about bribing Aashaan). We definitely worked hard (he had a sly smile when he said this, we leave it to the readers to gauge what it meant!). Along with that, we went sightseeing at all the touristy spots, enjoyed the local cuisine there (by which he definitely means he stuffed himself with all the pizza he could find!), and tried to experience as much of the places as we could in the limited time we had there.

So you are pretty happy here? What are your future plans?

For now, I am happy where I am. I believe I’m exactly where I want to be, to be able to lay a good and strong foundation for my long term career. I like having my finger in every pie here, and love how much I’m learning. I want my team to be the best here, and want to help Suyati get more business and become the leaders in the industry.

My long term career plan is to start a Software as a Service/ Product company empowered by disruptive technologies and helping people in their business.

Sounds exciting. We wish you luck. Any parting words of wisdom?

A STEP TO SUCCESS