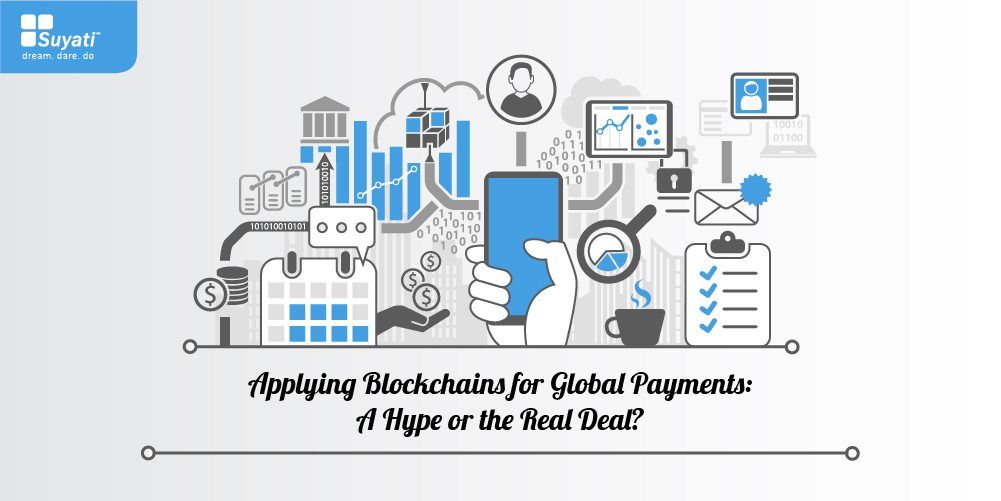 The Bankers Guide to Implement Blockchain for Global Payments

Blockchain is a rage now. But what exactly is a blockchain, and how can banks and financial institutions leverage this new fad everyone has been praising, to derive quantifiable benefits?

A blockchain is a series or chain of records or “blocks” linked together and secured using cryptography. The transaction data is embedded into each block. Apart from such data, each block contains a hash pointer and a timestamp linking it to a previous block. The blocks are inherently resistant to modification, making it highly secure.

Banks and financial institutions are traditionally conservative in the adoption of new technology. Innovations in the financial world are generally to solve a problem or pain point, rather than to replace systems that work fine.

However, banks and financial institutions do suffer from main pain points. They have been unable to adapt and offer sound solutions to the rapid changes in the business world. One such pressing pain point cutting across banks and financial institutions is the lack of a seamless, robust and cost-effective solution to transfer money from business to business, especially across borders.

Essentially, banks work with a payment infrastructure built before the Internet came up. Upgrades have not yet matched the pace in which people connect and transact online.

A point to note is major card providers, including Visa and MasterCard, assiduously avoid the payments market. The underlying infrastructure and business model of the card networks are not easily compatible with the ways and nature of corporate payments.

How to Apply Blockchain

The emergence of blockchain promises a viable solution, which would mitigate all the stumbling blocks or ills plaguing the existing system. Blockchain adopts its quintessential distributed ledger technology, where each transaction is recorded in a “block,” and transmitted to a distributed network of servers, without the need for a central intermediary. The intelligent algorithms embedded in the blocks ensure the transactions initiated by a banker proceed to its destination without any interruption, and without having to be routed through intermediaries. The transaction takes place through a single network, in near real time. The provider offers the endpoint software, which allows banks to issue liabilities back and forth instantly. The issuing bank clears the payment instantly and the beneficiary bank takes the payment.

The technology promises super-fast speeds and way quicker settlements, with markedly low costs, compared to incumbent methods.  With the growth of such a network, even the most remote corner of the world would be covered, and get the same benefits as mainstream centers. Blockchains are shared ledgers; hence, there is full transparency in every transaction, making the bank’s reconciliation duty very easy as well.

On the face of it, it is seemingly a scary way to send trillions of dollars zipping all over the world, but the technology is sufficiently mature enough to offer a high level of security and integrity.

Several vendors have already started offering blockchain based solutions, and of them, Ripple and IBM’s Universal Blockchain Solution stand out.

Read: Digital Banking: Are the banks ready for the transformation?

The Ripple protocol, in vogue for some time now, aims to replace the incumbent Real-Time Gross Settlement (RTGS systems) and other systems such as CHIPS. RTGS settlement occurs through movement of funds within the ledgers of the central bank, mandating all members of the RTGS network to maintain sufficient balances with the central bank to facilitate payments. CHIPS dictate bilateral obligations, with the settlement of balances on a periodic basis. However, there is no such settlement at a global level, simply for the want of a global entity to maintain currency balances on behalf of the member banks. Ripple fills the void, by offering a global clearing network, with the outstanding obligations recorded on the Ripple distributed ledger. Settlements, however, still take place through bilateral transfers of funds between banks, on a bilateral basis.

Read: Decoding the benefits of omnichannel adoption in banking

Ripple maintains the correspondent account balances in real time, and on a consent-based ledger, making it extremely easy for subscribing banks to reconcile the transactions. The real-time and instantaneous nature of the settlements relieves banks of big risks usually associated with the process, such as payment timing mismatches and Forex rate fluctuations. The markedly improved efficiencies drive down costs as well.

IBM’s universal blockchain payment solution, the new solution in the market, is a multi-ledger, single network for real-time clearing and settlement. IBM has affected massive R&D investments in Hyperledger Fabric, on which the solution runs. The solution is already active to transfer money across 12 currency corridors across the Pacific Islands and Australia, New Zealand and the United Kingdom.

Unlike Ripple, IBM aims to collaborate with the existing players, rather than compete and replace them. IBM has partnered with KlickEx Group, a cross-border payment system headquartered in New Zealand, to leverage its infrastructure. IBM also seeks to collaborate with Visa payment rail, to leverage its extensive global infrastructure of 17,000 banks, and a trusted global settlement infrastructure, complete with all the required permissions and regulatory licensing. Interspersing the blockchain on top of existing payments rails offers all parties the best of all worlds, and helps accomplish newer things without disruption.

Accenture estimates banks processing cross-border payments to the tune of $25 trillion to $30 trillion worth of transactions a year, across 10-15 billion transactions. The application of blockchain will improve the process greatly, besides cutting down costs considerably.

Banks seeking to implement such blockchain based global payment solutions need to either strike a partnership with Ripple, Blockchain, or any other player offering similar services. There is, however, nothing preventing banks with the necessary resources at its disposal to develop a similar blockchain payment solution in-house.

Here’s how AI Chatbots can Lead to Customer...