Suyati Technologies > Blog > What are the Challenges in developing frameworks for Smart Mobile Apps?

What are the Challenges in developing frameworks for Smart Mobile Apps? 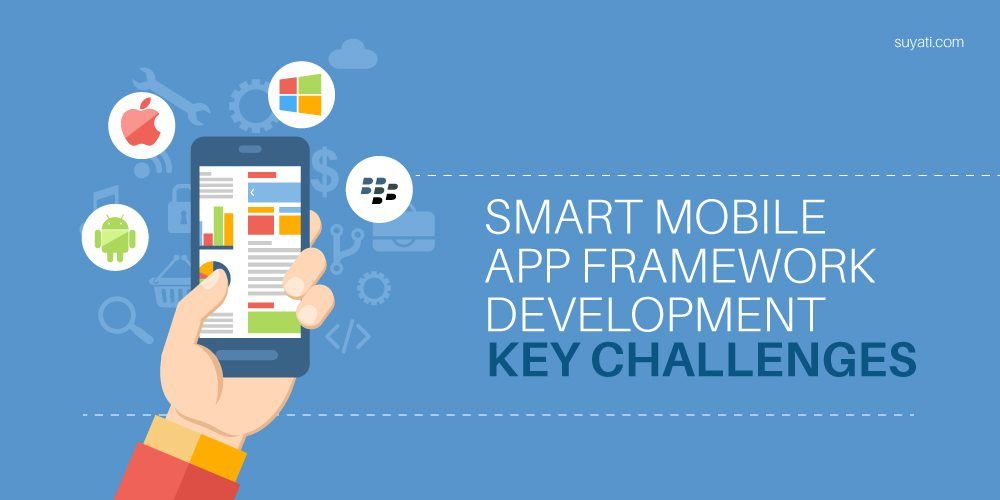 Mobile technology has grown by leaps and bounds. Today, there is an app for everything; from booking a movie ticket to making money transfers, to apply for leave in office, to collaborate with a remote team, and so on. But success of an app depends on finding the right market, and a right development framework to develop the app.

The mobile space is highly fragmented with multiple operating systems, and virtually infinite device configurations. Each platform has its own idiosyncrasies, and demands specific skills from developers. For instance, Java, PHP or Ruby-on-Rails is the preferred development language for the Android platform, whereas development on the Windows platform is mostly done on the .NET framework, and Objective-C for developing an app on iOS platform.

Instead of writing an application from scratch several times over, developers use mobile application development frameworks (MADP). Such frameworks offer code libraries and snippets, models, APIs, and more, extending the capabilities of the developer, and making the task of creating dynamic web apps easier. However, amid the advantages offered by such frameworks, identifying the right development framework is a big challenge.

How to Identify the Right Framework

A framework makes the work of the developer easier, sparing them the need to manually regenerate everything from scratch. Merely adopting any available framework will not necessarily guarantee success as not all frameworks are equal.

Poorly written code, databases that is not optimized, and poor default configuration can create glitches that can degrade the performance of the apps. Each framework comes with various levels of complexity, and its own set of limitations. Some frameworks support both native and hybrid cross-platform apps, while others support HTML5 apps as well. Some frameworks are open source, others are proprietary in nature. Within open source, some frameworks have larger user communities than others, and within proprietary frameworks, some offer more robust support than others. As with any selection, developers need to ascertain their priorities.

Mobile app development frameworks offer an easy way to develop cross-platform apps. Developers can tweak the frameworks, add new functionality through an external API, and customize the development to their liking.

The Hobson’s choice of Development Approach

Distinct from the choice of the platform, one can opt from the three development approaches – native, web (HTML5), and hybrid.

The native development approach usually delivers the best performance and user experience, but requires greater developer expertise. It converts the programming language into the native language of the target mobile platforms. These apps can also be difficult to maintain over the long haul.

The HTML5 approach develops web apps, stored in the cloud, and accessible via the browser.

The hybrid approach is faster and simpler compared to the native approach. It uses client-side technologies such as HTML, CSS and JavaScript to deliver apps. This approach allows the app to use the device resources in a much better way compared to HTML5 apps, offering the best of both worlds. However, the performance and user experience of hybrid apps rarely match that of native apps.

Likewise, Titanium, a popular open-source framework, enables developers to build cross-platform mobile apps in Java. Titanium offers 5,000+ APIs for building iOS, Android, Windows and BlackBerry mobile apps. Abode PhoneGap, based on Apache Cordova, another well-known hybrid framework, offers a wide range of plug-ins. Several other frameworks, such as jQuery Mobile, Ionic, Sencha Ext JS, Kendo UI and others make the task of web application development easy. Making the inevitable trade-offs on the desired levels of functionality, ease of use, user experience, support, and ease of development is a challenging task, and requires a high level of knowledge and familiarity with the latent systems.

The Challenge of Customer Preferences

In the absence of any single dominant or clear-cut framework, developers cannot expect to stick on to one framework for all their projects. But even when the developer identifies multiple viable framework options, to suit the required objectives, they needn’t necessarily have such choice. More often than not, developers would have to develop the application based on the devices and by extension the frameworks end users prefer. Customer preferences do not always follow a rational trajectory, and the most popular frameworks may not always be the most convenient one. In the enterprise set-up, the corporate policy and cost-considerations may influence the development of any one framework, over a technically superior one.

The bigger challenge lies in having the requisite skills and resources demanded by the adopted framework and tools. Developing for different frameworks mean learning new tools and programming languages, at a time when there is a severe talent crunch in the industry, and most developers already have their hands full with projects.

The Challenge of Correct Configuration

Syncing the selected framework with the available hardware, or selecting the appropriate hardware and software protocol, is another key challenge. Many developers consider just the ease of development process, which is a mistake. Factors, such as speed, power consumption, and protocol chattiness can impact the app as well, as does the on-screen resolution (DPI), CPU performance, memory and storage space of the device.

In today’s mobility driven age, designing a UI appropriate for mobility would be expected as given, but many development frameworks still miss the obvious, and developers would need to co-opt mobility requirements by adding an external API to a framework.

Even when two apps may deliver more or less similar functionality, the backend may be vastly different. The security, portability to run the application across multiple platforms, and the cost are the factors to be considered when deciding the development framework. Without doubt, choosing the right architecture is the key ingredient for a highly functional app.

When is the right time to move to Entity Framework 7?

Scale, Improve & Save Time with the Scheduler Dispatcher Framework

Enable AI to take CX to the next level at...