Decoding the buzz created by MongoDB at the MongoDB World 2015 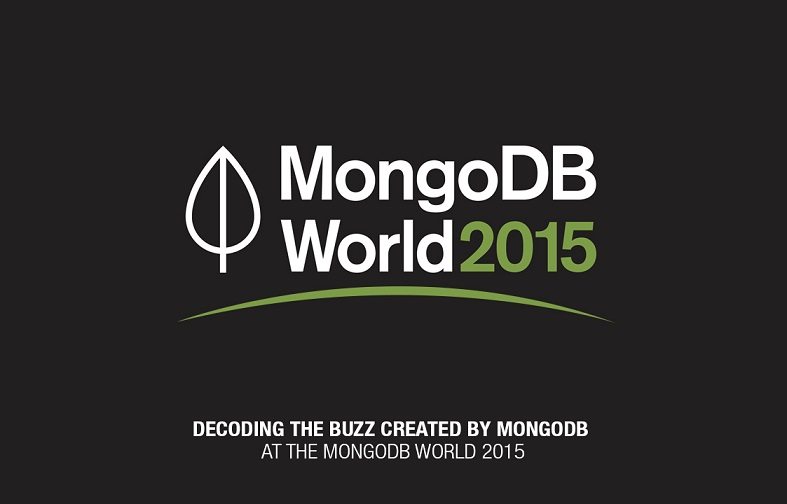 Even as the MongoDB leaders at the recent MongoDBWorld 2015 event geared up to answer queries regarding the new and upcoming enhancements made to the leading NoSQL database that will be a part of MongoDB 3.2 release, there was a lot of buzz around the swappable storage engine, a part of the MongoDB 3.0 release that happened in February. And not without a reason since it has proved to be a significant upgrade from the original default engine MMapv1.
Swappable storage engine and the integration of WiredTiger
As more and more users build complex data-driven apps, there cannot be a “one-size-fits-all” storage technology. With the new pluggable storage engine API introduced in MongoDB 3.0, users can leverage the same resources like the database language, query, and operating tools across different applications with different workloads, each powered by different MongoDB storage engines.
Referring to the announcement that WiredTiger is now MongoDB’s default storage engine, Kelly Stirman, vice president for strategy and product marketing at MongoDB, said that the company now wishes to focus on supporting the ability to switch storage engines as per user need.
The inclusion of WiredTiger storage engine as a part of the MongoDB 3.0 has further improved the performance of the database. According to MongoDB CTO and co-founder Eliot Horowitz, WiredTiger is a modern, high-performance, high- throughput storage engine that offers the NoSQL database greatly improved performance for certain types of workloads.
“The key word that MongoDB has been missing is document-level locking, which is engrained in WiredTiger from the beginning,” he said.
The pluggable storage engine along with the WiredTiger is equipped to support low-latency and write-intensive applications , delivers a 7-10 times higher performance, and has the ability to scale giving MongoDB the much needed impetus in the race against its competitors like DataStax and Couchbase.
As per Ray Smith, CEO and co-founder, Datahug Inc., “MongoDB’s data engine swap will allow faster parallel processing.”
Other benefits include lower storage costs and better hardware utilization.
With the integration of WiredTiger, MongoDB is able to bring down the storage costs by about 80%. This is because this arrangement allows for native compression, thereby reducing the physical presence as against the earlier configuration with the default MMAPv1. Reduced compression allows higher storage input-output (I/O) scalability leading to better performance and lower storage costs. The default compression settings are also modifiable.
With an enhanced concurrency control at the collection level, there is also a higher throughput and better hardware utilization.
Enhancements expected with the MongoDB 3.2
Eliot Horowitz, co-founder and CTO of MongoDB, said: “As the range of applications built on MongoDB continues to expand, we believe the capabilities announced today will be extremely well received as they deliver on our core promise – to help organisations move faster, and dramatically simplify access to data to a broader audience.”
Let’s discuss the features that are expected to be launched in the next edition of MongoDB.
Connector for BI:
Although MongoDB has gained traction due to its flexibility and lack of structure, this very feature works as a drawback when it comes to data visualization. The company looks to overcome this shortcoming in the upcoming edition with the new connector to business intelligence (BI) and data visualization tools like Cognos, SAP BusinessObjects, and Tableau. The connector provides users SQL-based access to these tools through the MongoDB’s Aggregation Framework boosting the performance and scalability.
Dynamic Lookups:
The “lookup” feature as a part of the Aggregation Framework can combine two types of related data and is considered a useful tool for reporting and provides flexibility for modelling data.
Document Validation:
The document validation rule of the MongoDB 3.2 can be used to apply rules to data fields to verify data types, fields, mandatory fields, etc. This feature along with the dynamic schema will allow for great flexibility in defining rules that will also provide a two-way benefit of data quality and simplified application development.

Encryption for Data at Rest:
This add-on security feature with keys secured by the industry standard Key Management Interoperability Protocol (KMIP) is mainly targeted at regulated industries like the healthcare, finance, and government that have stringent security requirements.
Schema Visualization:
MongoScout, a graphical interface, will help the developers and DBAs to get a view of the data structure. Apart from displaying documents, MongoScout can analyze data to visualize the fields and their values. This can be a powerful tool in the hands of the developers to make decisions about indexing and validation rules.
The 3.2 version is expected to go into a beta release over the summer before becoming available to all around the fall.
The new features make MongoDB “a better fit for how you run your business,” said Kelly Stirman, vice-president of strategy at MongoDB.

Tips to reduce cost of hosting on Sitecore sites

The Google-Ingenico Partnership: Growth of E-Commerce in Europe

Is Hybrid Cloud All Set to Fuel a Fresh Wave...