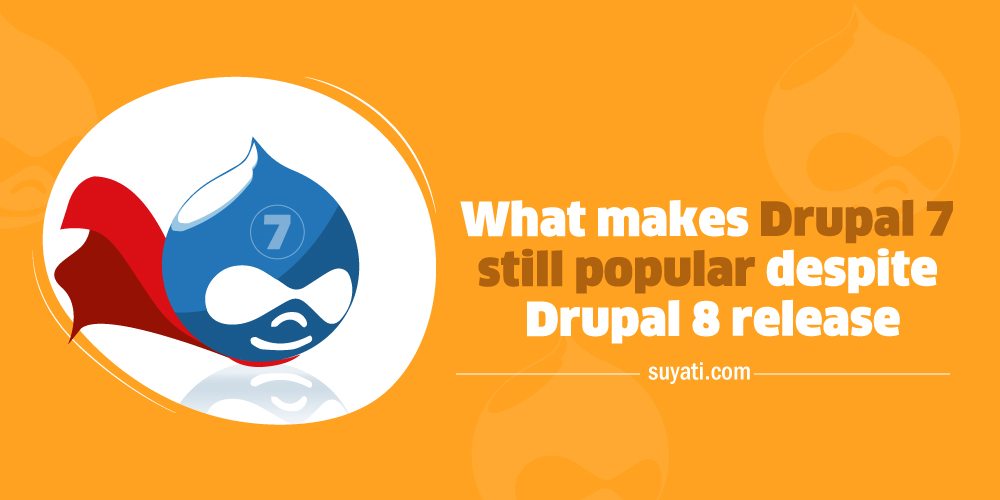 Drupal 8 was released in November 2015, but bucking the trend of users adopting the new in place of the old, the incumbent Drupal 7 continues to be widely popular, and there is a general reluctance to upgrade to Drupal 8.

On the face of it, the lukewarm response to Drupal 8 may come as a surprise, considering the new version is undisputedly a powerhouse, offering a much wider set of features compared to Drupal 7. Drupal 8 comes with many popular modules such as CKEditor, offers built-in responsiveness, refactors the file structure, and offers new ways to create modules and templates.

However, dig deeper, and solid reasons for the general reluctance to migrate to Drupal 8 start to emerge.

If it ain’t broke, don’t fix it

The adage “if it ain’t broke, don’t fix it” seems to have caught on with Drupal users.

According to developers, website performance beats all other considerations. Only a stable and highly performing website generates high search engine rankings, and higher conversions. There is also the added benefit of stable websites having greatly reduced hosting costs.

Drupal 7 has been consistently ranking as one of the most popular open source software, owing to its stability, feature-rich functionality, end user configuration, hierarchical software architecture, hook based extensions, scores of stable modules that facilitates functionality extension, and strong support. When Drupal 7 meets the requirements of most users well, there is no motivation to upgrade to Drupal 8. While the feature list of Drupal 8 is not in doubt, its nimbleness is doubtful.

The Architecture to Doom

Drupal 8 promises several additional frameworks and platforms, including the latest PHP concepts and standards, object-oriented programming, and the Symfony framework. However, realizing such features may be an over-kill for many enterprises. In any case, such features require advanced programmer skills, which is at cross-purposes with one of Drupal’s key strengths, ability to execute programs without having to understand object-oriented programming or modern frameworks and techniques.

Drupal draws its core support base from self-taught experts, many of who do not even have a technical or programming background. Such users would rather migrate away from Drupal altogether than upgrade to a tech-heavy Drupal 8.

Even for professional programmers, Ruby, Node.js, Angular.js etc. offer advanced framework compared to Drupal 8. Without the low programming advantage of Drupal 7, there remains no compelling reason to retain Drupal itself. Many developers are asking themselves the question, “If I have to invest in learning something new, why not Ruby, or Node.js instead of Drupal8?”

A Step Forward and a Step Back

Drupal 8 core is stable and has amazing capabilities, but the new version still has to take a few miles to become viable for production use cases beyond more basic sites.

The content, content types, taxonomy, users and comments migrate seamlessly from Drupal 7 to Drupal 8, but for complex sites, things get challenging. For instance, many contributed modules are yet to be ported. The ability to make a few simple tweaks to the data, one of the most convenient features in Drupal 7, is lost.

Drupal 8’s highly intuitive Configuration Management system fill in gaps left by other methods admiringly well. It is now possible to push the whole site’s configuration around Git and merge it fast. However, significant glitches fritter away such strengths. A case in point: export of some modules such as Entityqueue and Display Suite producing invalid configuration.

Drupal 8 brings in a lot of features out of the box, but this means it is massive compared to Drupal7, taking almost five times as much space. Drupal 7 and Backdrop has 11.7 and 11.8 MB respectively, whereas Drupal8 is 42.2 MB is size! Drupal 7 is 14.5 MB on disk, compared to Drupal8’s massive 72.2MB on disk.

The impact of a bloated Drupal8 goes much beyond requiring extra disk space. A bloated platform takes longer to load, in an era where speed is of critical importance.

The inflexibility of the migration process does not help either.

Web admins would want to take the opportunity of migration to rework the website, renaming or even removing old fields, re-architecting some categorization, removing some unpublished content, and more. There is no easy way to go about doing these, except through writing classes, hook, and post process scripts. Such actions slow down the process considerably, a disaster in today’s fast-paced business environment where speed is of the essence.

The Backdrop Fork: The Last Nail in the Coffin?

Another big reason for the lukewarm acceptance of Drupal 8 is the Backdrop folk. A team led by Ms Lampton and Mr Haug has forked Drupal and depending on how the fork pans out, and more importantly, if Backdrop reinvents the Drupal Classic, a significant chunk of Drupal user base may move over to Backdrop rather than to Drupal 8.

Backdrop incorporates many default functionality included in its core, offers a refactored structure, and a promise to be faster, as it does not come with the excessive features found in Drupal 8. In fact, migrating to Backdrop would require a lesser learning curve than migrating to Drupal 8, for Drupal 7 users. However, the risk of not having established support and lack of backwards compatibility scares away many users from embracing it as of now. Several users are now in a wait and watch mode, to see how Backdrop would pan out.

To cut the story short, Drupal 7’s unmatched popularity rests on it being a modular and extremely extensible platform, offering unmatched flexibility. In contrast, Drupal 8 is still a bit of a mystery. While it remains a powerhouse, it appears not to offer the strengths that made Drupal7 popular in the first place. The future of Drupal 8 hinges on whether the enhancements it offers can make good for the lost nimbleness and convenience.

Please send a mail to services@suyati.com for more details on our Drupal solutions.

How Sitecore harnesses AI and Machine Learning to deliver intelligent...

When do you outsource your Product or Service Development?