Suyati Technologies > Blog > What to expect from Salesforce in 2017

What to expect from Salesforce in 2017 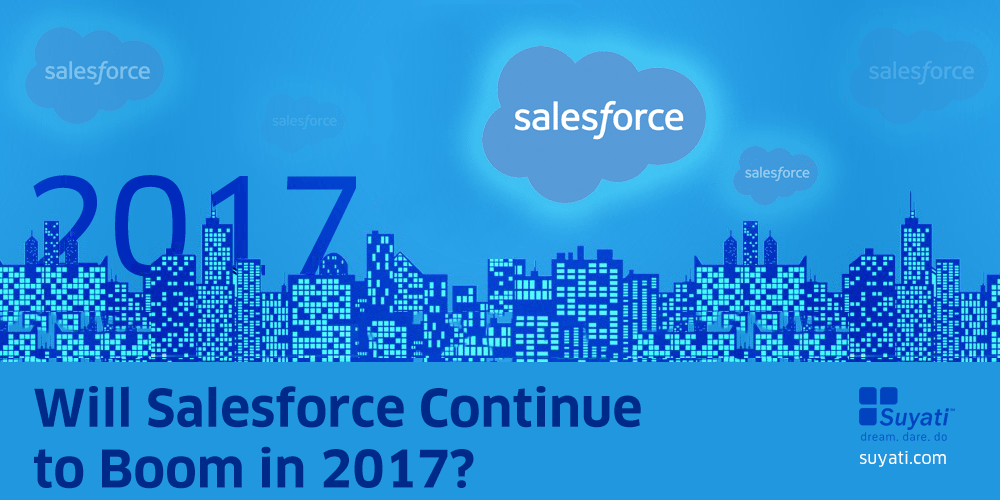 The only thing constant in Salesforce‘s world is change. The company has always brought out innovative new features and products to leverage the latest technology has to offer, while unlocking new possibilities for their users.  The year 2017 promises to be no different.

The Service Cloud to Get Even Better

The Salesforce Service Cloud is all set to be rejuvenated with a slew of new features. On the anvil are out-of-the-box capabilities such as map based field agent management. Going forward, there would be better integration with customer support as well, aimed at enabling subscribers monetize their relationships with customers in a much more effective way than before.

Einstein to Get More Depth

Salesforce is expected to get a lot smarter in 2017. The cat is already out of the bag in the form of Salesforce Einstein, which leverages Artificial Intelligence to make an accurate prediction on what users want. As things stand, what is offered by Einstein is only the tip of the iceberg. By the end of 2017, Einstein will probably become a powerful and popular AI engine, helping to automate key tasks, speeding up processes, and doing much more. Einstein would likely tell marketers much more about the data they have, helping them close more deals, issue timely reminders, and reach out to the right people at the right time, through the right channel. In short, Einstein is likely to make the marketer’s life much easier, efficient, and productive.

Salesforce has always taken the acquisition route for added features and functionality. Salesforce’s acquisition of BeyondCore, a company focused on the smart data discovery and analytics niche has already set the tone on what to expect in terms of smarter insights.

Lightning is Here to Stay

The Salesforce Lightning framework has already re-defined how Salesforce apps will be built, going forward. Continued improvement of the Lightning Process Builder and Lightning App Builder would greatly reduce the need to write code, and promote the cause of citizen developers. With more and more components added to the Lightning Component Exchange, developers will be able to use the “building blocks of functionality,” without having to reinvent the wheel.

Customers have been somewhat lukewarm to embrace Lightning, though. However, as the benefits become apparent, Lightning will see widespread adoption and become the default way to build Salesforce apps. Manu K Mohanan, Salesforce Developer at Suyati believes that with its fresh new UI and compatibility with various devices, Lightning LEX will become a natural upgrade from Classic for users. The scope of better support across the platform is another highlight most clients cannot ignore, he says.

There is anyway a February 2017 deadline for all AppExchange apps to upgrade to become compatible with Lightning.

Salesforce DX, in a short while after it was announced at the Dreamforce 2016 conference, has already shaken up the development space. It allows developers the choice to build with tools such as Selenium, Git, Eclipse, or anything else they prefer. It comes with an updated Eclipse integrated development environment (IDE) that offers a rich set of functionality for developers, and facilitates unbridled teamwork. More and more developers would utilize these features to transform their app development work in 2017.

Salesforce DX is further on the cusp of big time innovations, especially in the areas of test automation. While Salesforce DX is as of now primarily for coders, the long term vision is to make it easier for coders and non-coders to collaborate easily. Coupled with the Heroku cloud platform, Salesforce DX could turn out to be the big game changer in 2017.

In Certification We Trust

Salesforce is likely to invest heavily in developer tooling and training in 2017, and this will have a big positive impact on the overall Salesforce ecosystem.

A Salesforce blog recommends professionals with expertise in Salesforce to get certified, to prove their credentials in a highly evolving cloud computing space.

Certification apparently helps in more ways than one: It helps the professional smoothen out rough edges of gaps in knowledge, enables them to keep abreast of the constant changes and gain early mover advantage, and above all, improves productivity. Salesforce certified professionals can also apply the latest cutting edge knowledge to their business and make themselves truly indispensable.

As technology matures and the drawbacks are ironed out, there is an increasing move towards the cloud. Salesforce, by facilitating full integration and seamless operations through the cloud, stands to gain big as different companies seek to shift their entire operations to the cloud. Year 2017 will see several companies migrate their legacy ERP systems into Salesforce cloud.

In the words of Daniel Peter (@danieljpete), Salesforce is likely to enter the blockchain space in some way in 2017, either through the acquisition route, or through partnerships. “The question is whether or not they will, but when and how.” Blockchain has become hugely popular of late, with even Visa deploying blockchain ledgers for transaction management. Salesforce developers have the capability to improve the technology by adding layers for better data management through validation rules, security and sharing settings.

The Rise of the Voice

Likewise, killer apps that converge chat, mobile, and take mobile commerce to new heights can also happen any day now, considering the technology is more or less in place.

While the above are more-or-less confirmed trends, the speculations on what will further unfold in 2017 are endless. This is more so considering Salesforce has acquired a slew of impressive companies of late, and is seeking to integrate the niches they offer into its main offering.

As always, it is interesting days ahead for Salesforce, and all signs point to a bright and intelligent future.