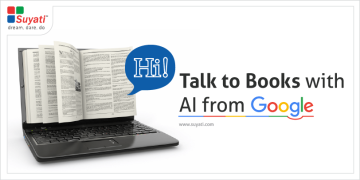 Google’s latest experiment with AI gives an idea of how far machine learning has progressed in terms of natural language processing. Google’s research division has made two AI Language tools publicly available, and they come under their collection called Semantic Experiences. Talk to Books and Semantris are tools that demonstrate AIs’ ability of reasoning and response.

In “Talk to Books”, AI has been fed with data from more than 100,000 books. When the user types in a question or a statement, AI tries to find natural sounding or most logical responses from related books with similar sentences. The response is based on relevancy to the typed input and not simply keyword matching.

Kurzweil and Bernstein describe it as good as talking to books, and they search over billions of books based on the semantic meaning of the sentence level. The user can decide which one to read based on the result.

“Semantris” is an interactive word association game backed by a semantic search. It works just like Talk to Books, ranking the words based on their relation to the answer that has been typed in.

In Semantris, the AI displays arbitrary blocks with some text. Users have to ‘break’ the block by typing a word that relates most to the text written on them. When AI matches the word and the text in the block, it ‘breaks’ the block and the points are awarded. The experience is similar to Tetris-like break-the-blocks.

It’s a way to “enable algorithms to learn about the relationships between words, based on examples of actual language usage,” says Ray Kurzweil, notable futurist and director of engineering at Google Research, and product manager Rachel Bernstein as quoted in Verge.

Google CEO Sundar Pichai compares AI and machine learning as important or maybe even profound as man’s basic utilities. Google’s experiments are more to gather data to improve AI’s ability with ample information for relating words in a semantic way. This is just a beginning of what future AI advances in language processing will look like, as they move beyond keyword matches.

Google’s work on AI’s natural language understanding has been published as a paper here. There is also a pre-trained module publicly available for experiment and research on its TensorFlow platform

Top 5 possibilities of Blockchain in banking for 2018

How IndianMoney.com Improved Efficiency and Conversions with Buyer Rhythms Engine

The New Smart Features of Kentico 9