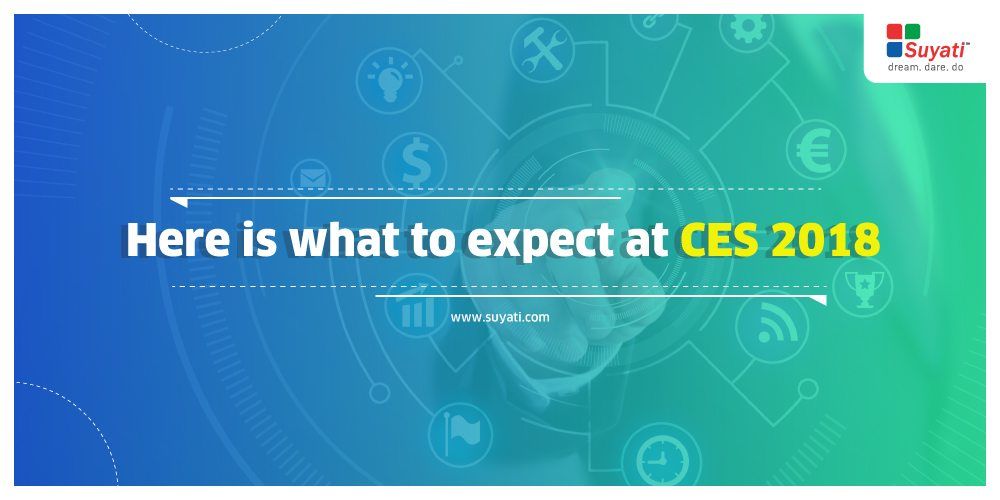 CES 2018, the biggest gadget show for consumer electronics that have been in for 50 years now, has about 4000 companies and more than 184,000 people participating this year. CES 2017 saw consumer experience taking a front seat than simply gadgets and technology. CES 2018 expects artificial intelligence, VR and AR, along with innovations in automobiles, smartphones, fitness and plenty of smart home gears.

CES 2018’S big exhibitors include Google, Samsung, Sony, LG, among others, though most of these biggies prefer to exhibit their flagship products at standalone events. But start-up and upcoming companies see this as a great platform to showcase their products for global visibility.

Amazon’s Alexa who stole the show in 2017 is bound to face competition from Google’s Assistant in 2018. From smart home appliances to watches and fitness robots, the voice assistant seem to have found its way into different walks of life. Artificial Intelligence seem to be the most promising buzzword everywhere.

Interestingly, there are now products that offer multi virtual assistant support. LG’s TV now supports Alexa along with Google assistant. HTC has a smartphone that again supports both the voice assistants.

Samsung’s micro LED TV – The Wall, is a much anticipated product this CES. Micro LEDs are self-emitting LEDS and do away the need of a backlight, making it a better choice than OLEDs. Samsung gives the customer opportunity to customize the size as per their requirement. But the TV would be expensive to manufacture than the OLED displays.

LG Display’s 65-inch screen rolls up like wrapping paper into a box. The front of the 4k OLED display in no different from a regular TV screen. LG had also announced an 8K TV, and all its future TVs to be enabled with Voice assistants.

The tech industry visualizes a future with a new kind of technology, of having a touchscreen connected at the kitchen counter doing things like making video calls, turning on lights, playing music, shopping, all with a voice controlled command.

Four new smart displays made by Sony, Lenovo, LG and Samsung owned JBL has already been out at the CES 2018. The device are designed to do everything at home, with a Google Assistant powered smart speaker.

The wellness market is seen as a very promising sector and has been well invested in this industry this CES.  Innovative solutions has been developed for diagnosing illness as well as for treatment.

ICI Vision is designing glasses that combines multiple technology to tackle blindspots of the eye.

Samsung’s GoBreath that is going to be featured in CES is aimed to assist people who experienced lung damage and other pulmonary complications to a speedy recovery.

Women health has not been left out this CES. Solutions have been developed to work on bladder control, an issue faced by many women after childbirth. Me.Mum, camera attachment to smartphone claims to detect fertility in women by studying their saliva.

Fabrics that can monitor heart rate, an eye mask that nudges the owner to change position when they snore at night are just few among the many intriguing inventions.

Shapescale, a weighing scale promises to 3D body scans, to monitor the way body changes with exercise. This could be a realistic motivator for weight loss enthusiasts.

Some of the featured exhibitors include Fitbit, Nuheara, Philips, IBM among others.

CES 2018 is going to see driverless mobility a reality. A key panel of experts share their perspective on how far we are in realizing a city with self-driving technologies.

Though the biggies in the automotive industry would prefer to let out their important news at the Detroit Auto show, there is still an array of electric sports car, robo taxis and even a three wheeled electric car on display.

Yamaha focuses on a self-driving bike prototype for racing over 120mph.

Drones have proved themselves to assist in everyday life whether it is to capture, or rescue or to provide aeriel coverage.

SwellPro’s Splash Drone has been designed to help fishing expeditions by dropping bait from a height. Sirius CX-180, is designed for use in search-and-rescue missions at night.

VR technology is expected to show prototype models of various experimental attempts. GoTouchVR’s finger pads and Sense Glove’s exoskeleton are just some of them.

Marketers believe that it is AR that shows a promising potential, with graphics mixed with real life.

With imaginations running haywire, and incredible innovation, CES provides the perfect platform for fresh ideas by industries, small and big. Customers can expect their tech-tangled life interesting and for the better. Check out all the happenings at CES 2018 here.

Celebrations: The Suyati Way of Life

The Impact of Digital Transformation on Education

Desktop Virtualization – How can it help Enterprises?