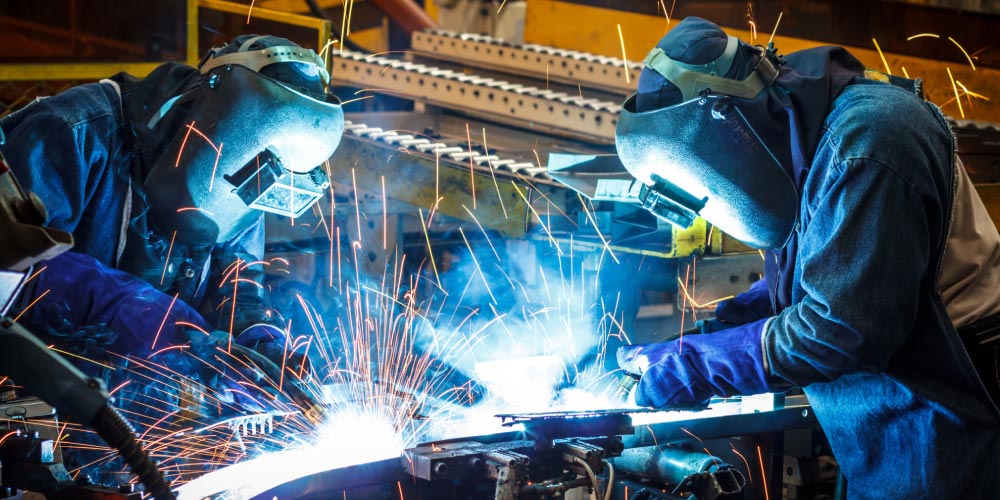 Suyati Technologies > Blockchain > How Blockchain is contributing to Manufacturing 4.0

How Blockchain is contributing to Manufacturing 4.0

Blockchain is making waves, and not just in bitcoins. As blockchain’s ability to disrupt key processes and established paradigms become evident, smart manufacturers have started to harness the potential to gain early mover advantage.

The key strength of blockchain, which makes it so robust and popular, is decentralized storage of data, without any central authority. The data being distributed across several nodes also renders it immutable. The World Economic Forum predicts 10% of global GDP to be stored on the blockchain by 2027.

One blockchain possibility already adopted widely is smart contracts, or “bundles of coded logic or procedures which sit beside the entries in the ledger.”A conventional pen-and-paper contract is separate from the actual execution. A may promise B to pay $X upon delivery of certain goods, but may not follow up with the promise. With a blockchain smart contract, the execution is integral to the contract. If A contracts B to pay $X on the delivery of certain goods, the blockchain will release $X from A’s account automatically when B releases the good. Once the contract is executed, A cannot cancel the release of $X, unless the contract itself is mutually canceled.

Smart contracts also offer several spin-off benefits in the form of improved transparency. The digital efficiency brought about by smart contracts cut out the middleman, and in the process enhance efficiency and reduce costs.

Read: Top 5 possibilities of Blockchain in banking for 2018

Smart manufacturers are busy toying with smart contracts in a big way. Smart contracts are handy to get confirmed orders from customers and schedule production to match actual demand, and also to enforce reliable supply of raw materials. Smart contracts overcome some of the major stumbling blocks which have traditionally inhibited the widespread adoption of production-on-demand concept and even just-in-time inventory.

Traditional manufacturing has always been highly resource-intensive and inefficient. Manufacturers produce in bulk and then try to find customers for the same, pushing products to people by coaxing, and cajoling in many ways. The scope for customization of a manufactured product is extremely limited.

Blockchain promises a solution to all these pain-points. A model is already implemented in the energy markets, where blockchain power energy micro-grid decentralizes the production of energy. Peer-to-peer blockchain solutions facilitate the local trade of solar energy.

A 2016 study, “Genesis of Things” by Blechschmidt/Stöker, offers an interesting proposition on how blockchain can eliminate the overhead or the “trust tax” in manufacturing. A blockchain-based platform based on 3D printing facilitates registration of product design, negotiating pricing, identifying the nearest and cheapest 3D printer, negotiating conditions with the customer and the logistics service provider, and finally carrying out the production process right from sourcing raw material to delivery of end-product. All these steps take place seamlessly, without a middleman. The digital product memory offers the entire product history, at the fingertips of any stakeholder, improving transparency manifold. Doing all these processes through conventional ways is practically impossible owing to the inherent limitations of the existing systems and inability to overcome silos.

Read: A guide to implementing blockchain for insurance providers

The US-based Moog Aircraft Group, one of the pioneers to combine blockchain and 3D-printing, plans to apply blockchain to enable a point-of-use and time-of-use supply chain. Blockchain would help printing aircraft parts exactly when they are needed, in the process saving inventory and logistics costs.  Blockchain helps to transfer data to a verified 3D printer in a highly secure way. Post-production, it helps to establish the authenticity and traceability of the part, confirming the part being installed into an aircraft is not counterfeit.

The biggest application of blockchain in manufacturing so far has been in supply chain management.

Blockchain offers a highly powerful, reliable, and cost-effective alternative to authentication based on certificates from authorities. When every product is assigned with a blockchain based “digital passport” that offers traceability down to the point of origin of the raw materials, it becomes easy to trace the origin and authenticity of the product. Implementing blockchain can largely eliminate the menace of fake goods. Blockchain also infuses transparency and reliability into the supply chain.

IBM, in collaboration with shipping major Maersk has applied blockchain to track containers during the shipping process, and in the process has yielded rich dividends in a big way by reducing the effort and paperwork required for the shipment. The blockchain platform increases transparency manifold, with all stakeholders in the supply chain given relevant and actionable information in real-time.

Read: Top 5 Possibilities of blockchain in the education sector for 2018

The irreversibility of data is valuable for controlling and documenting quality, and greatly reduces the “trust tax” inherent in many conventional processes.

The immutable characteristic of a blockchain ledger eliminates the scope for errors and misunderstandings. The real-time transparency offered to all stakeholders enables proactive interventions as and when required, without halting the process.

A central authority, which is indispensable in today’s conventional processes is the root cause of security flaws and also the high costs of trust. The immutable and decentralized characteristic of blockchain eliminates both these stumbling blocks.

Blockchain in manufacturing is still in a nascent stage. The lack of definite standards, the often hazy legal and regulatory framework, and technical challenges, especially at the manufacturer’s end, inhibit the widespread adoption of blockchain in manufacturing.  A tech overhaul of the enterprise to demolish silos and upgrade systems is an essential pre-requisite of adopting blockchain.

The other challenge is the scope of blockchain-led interventions. So far, most of the blockchain interventions in manufacturing have processed on efficiency improvements, or doing existing things in a better way.  With manufacturing concerns accounting for 86% of the top 100 companies in R&D spending worldwide, the prospects of manufacturers experimenting with blockchain, to innovate and establish new paradigms is huge. The integration of blockchain to cloud computing, data modeling and simulation, predictive analytics, advanced analytics, and also Internet of Things (IoT) platforms still requires traction to gain critical mass.

There are hundreds of potential use-cases, and it is only a matter of time before blockchain takes manufacturing to a whole new level, and becomes an integral part of manufacturing 4.0.

Does Sitecore Cortex Live up to the Machine-Learning Hype?

Top six tips for a seamless cloud migration for enterprises