Suyati Technologies > Blog > How many of you want to become an entrepreneur?

How many of you want to become an entrepreneur?

A conversation between Suyati Tech’s CEO and 11 freshers 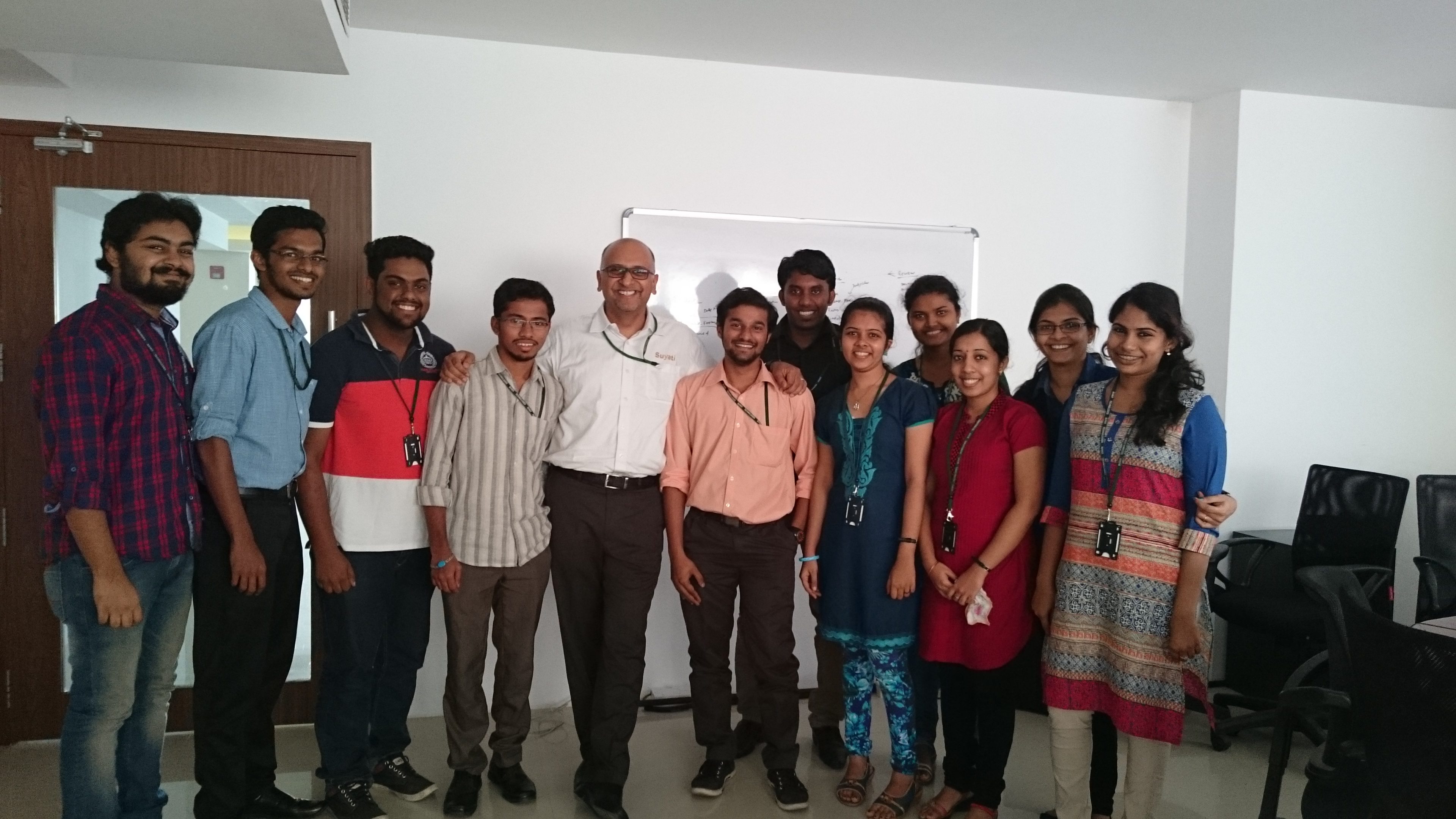 As the CEO of one of the Deloitte Technology Fast 500 APAC 2015 companies, Mukund Krishna is often seen interacting with Suyatians. He approaches each of us with a bright smile, a hearty laugh or a firm handshake. Being a batch of eleven newcomers at Suyati, we have always wondered about him.

One fine day, we received an email from Archana, our HR Executive, informing us about a meeting with Mukund. We were quite excited, but surely not tensed, because we all knew that he is a friendly and affable person. In spite of this, our minds were filled with lot of anxiety. How would it be? What questions could we ask? Do we need to do any additional preparations or research?

The session with Mukund kicked off with a brief discussion on “Marketing tech”. Each of us were asked to define “Marketing Tech”, and we all came up with different answers. But Mukund gave us a clear explanation and helped us understand it with the aid of a real-time scenario. He jotted down all our names in his diary, which he often referred to, to call out our names.

His first question to us, “How many of you want to become an entrepreneur?” A few were interested in starting their own ventures and they discussed their preferred start up plans which included a gaming company, a designing company and a company involved in delivering web application services. Mukund assured us that we can approach him at any time, for any help with our startup goals. Being a part of NASSCOM’s committee for 10,000 startup initiatives in Kerala, his aim is to motivate the spirit of all the newcomers and help us remain steadfast with our goals.

The session continued with an analysis of our strengths and weaknesses. We opened up to Mukund regarding our thoughts about our own strengths and weaknesses. He was very appreciative of our honesty and our willingness to disclose and admit our flaws freely. He individually commented on each of our thoughts and quickly noted them down in his diary. His warm laughter kept things light and not even once did we feel that we were being interrogated by a CEO.

Following this, there was a Q&A session with Mukund about his personal and professional life. We asked several interesting things about his professional life, the background and story of the formation of Suyati, his motivations and motivators, the happiest incident in his life, the risks and difficulties he faced in building up a company like Suyati and many more.

Mukund told us about the difficulty he faced to shift his family from the USA, and moving his aged parents from Chennai to Kochi when starting the company, and about the fall of his salary from a six digit figure to zero when he left the reputable position in his previous company, the absence of a fixed income for an extended period and the huge responsibilities of taking care of his employees. He told us that he had given up job offers with hefty pay packages in Bangalore and Pune, to start Suyati, since he did not want to relocate his family to a new city. In his early days as an entrepreneur, he was often confused as to whether this decision was right. The only thing that kept him going was the trust he had in his team, family and his initial clients who considered the risk and took a gamble on his success.

He also revealed to us that there are hundreds of people who motivated him like Mahatma Gandhi, Dr. A.P.J. Abdul Kalam and even Priyanka Chopra, but above all, his first and foremost, and probably his most inspiring figure among the hundred, is his wife Revathi Krishna, one of our directors and a truly remarkable personality.

The journey of Suyati Technologies was possible because there were many more people who helped him and had faith in him. He said that he had received a huge support from his team, with the major role played by Vincent N P, our HR Director. He had started Suyati with a nine-member team at a single location in 2009 and now his family of 200+ employees is spread over 3 offices. He is very grateful to Robert Kidd, his best friend and guide, who had helped him a lot and gave him a huge support to start a company like Suyati, by blindly giving him the seed money. He told that one of his happiest moments in life was when Suyati got its first client.

As Mukund came to know all our strengths and weaknesses, we also got a chance to discuss his strengths and weaknesses. His greatest strength was his calm nature, simplicity, and great listening skills. He did not communicate much to us verbally, but we know he had transmitted the required spirit to us during the session. What started as a discussion with the CEO, ended up as an informal chat with a fellow colleague.

He also emphasized to us that there is no reason to look back, when we have so much to look forward to. Yes, this session gave us the guarantee that we have a bright future at Suyati. As for Suyati, the journey continues, while our journey is just beginning!

What Mobile App Developers need to look for in Cloud

CRM Wars: Salesforce.com vs Microsoft Dynamics vs Oracle vs LinkedIn