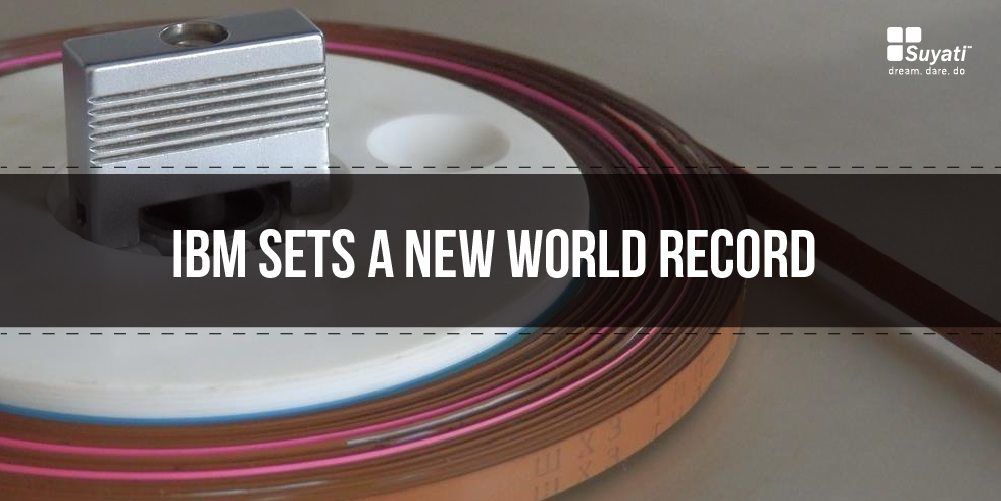 In the race for faster, larger memory and storage option; IBM Research sets a new world record by collaborating with Sony Storage Media Solutions. Together they have developed a sputtered magnetic tape that is palm size, capable of storing 330 terabytes of uncompressed data, has a density of 201 gigabytes per square inch, and is 20 times more than the areal density of the best performing tape drive currently in the market.

As strategic decisions can be construed from the data gathered, for businesses data is the new currency. But the new challenge is to find solutions to store this valuable data, and maintaining the privacy of customers. We saw a bout of sophisticated data storage options in the last few decades.

Using magnetic tape as a medium for data storage and retrieval is not new. The relationship of IBM and magnetic tape is half a century old. In 1964, IBM had invented a solution to break the memory and storage log jam. It offered vacuum column magnetic tape drives that could process 90,000 characters per second, and start and stop in 0.0015 seconds. The IBM vacuum column became a forerunner for all the other manufacturers used for the next several decades.

But magnetic tapes is making a comeback. Since 2006, IBM scientists are committed to improving tape-based data by setting new world record for the fifth time in the amount of data that the magnetic tape can store. IBM’s latest tape drive has a density 165 million times higher than its first product.

It is now considered more cost-effective, reliable, and energy-efficient than disk-based data, helps to boost the speed of data processing, and has a density that is even higher than hard drives.

According to IBM spokesperson, “Though tape has been traditionally used for video archives, back-up files, replicas for disaster recovery and retention of information on premise, the industry is expanding to off-premise applications in the cloud. While sputtered tape is expected to cost a little more to manufacture than current commercial tape that uses Barium ferrite (BaFe), the potential for very high capacity will make the cost per TB very attractive, making this technology practical for cold storage in the cloud.”

Write to services@suyati.com to avail of our consultancy services to guide you on the best cloud storage options available.

Which SalesForce License Should You Opt for? ISVForce...

What you need to know about Microsoft Dynamics 365 and...

Sitecore Positioned a Leader by Gartner in their Magic Quadrant...

How to Choose the Right Software Testing Methodology