The chronology of Google’s cloud platform turned another landmark with the Google Cloud Console App. Google introduced the Google Cloud Console App as a Beta preparation for any emergencies that might require the IT performers to check in on their cloud apps while on the move. Google for Work is the domain within which Google Cloud Platform was brought into being. On 10th June 2009, Google laid out its developer-friendly move through the change of quotas intended to let majority of apps free. Over the years, Google has continued to represent the spirit of progress and development through a stream of maturities in its cloud world. 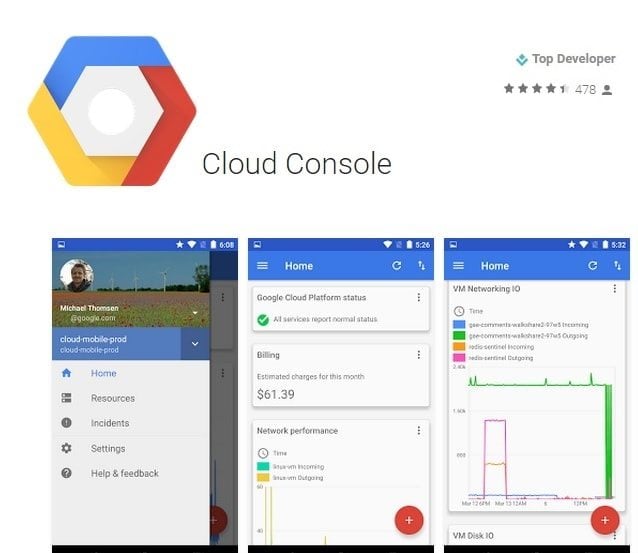 With SunGard and Pythian as partners, Google initiated Google Cloud BigTable into its cloud-army in May 2015, which can be utilized for the heavy weightlifting of data analysis. Remarking on the power of cloud computing, Brian Goldfarb, Head of Marketing, Google Cloud Platform, commented that the Google Cloud Platform is packed with limitless possibilities for enterprises. The value of a cloud platform is determined through the matrix of services within which it is positioned. Mid-2014, Goldfarb pointed out that Google had a series of such services in the pipeline which would allow it to bag the giant enterprises.
Consistently expanding its sky-umbrella to enterprises, Google Cloud Platform caters to Autism Speaks, SnapChat, DNAstack, Rovio, Mendelics, MAG Interactive, Wix, Feedley, Screenz and Interactions Marketing among others.
The Mind of Google Cloud Platform: Empowerment of Customers
Since its inception, Google has owned the territory of development with an unprecedented open-mind. Emerging as an army of Googleys, Google has enlivened the Frankenstein of Cloud Computing with core values of empowering the clients. The clients, in their association with the platform, partake of these Google values.
Hallmarked with hard work, the team of Google Cloud Platform represented by Chris Elliott, Engineering Solutions Architect, shares that the only challenge they face is that “There are only 24 hours in a day!” Their reign over the virtual world is painted off with a disciplined passion hard to come by. A flip through the scrapbook of Google Cloud Platforms will bring us to a series of happy-faced customers regularly logging in their ‘Googley Good News’: RealMassive on makeover of their business estate into a power-dripping data home, AeroSpike on crossing the bright silver line with one million writes per second through Google Compute Engine and Wix on shaking hands with success of multi-operations of the cloud.
The Life of Google Cloud Platform: Soulful Work All The Way
The 8th annual Google I/O brought to Moscone Center the battalion of virtual world, armed with coffee and a collective mind of progress. Generations of keyboard-tapping fingertips brought to homes the mobile revolution, predicting that by end of 2015, over 30 models of cars will possess the Android Auto and the birth of Android M. Halfway through June, Google had bagged on its back HTC. The latter announced that the encounter with Google data center had brought to end their search which began with the alleged big-names of Alibaba, Amazon, IBM and Microsoft. Just a week ago, the start of July saw the rise of Google’s extended hand to enterprises with kick-starting of Distributed App Workload Testing (through Kubernetes). Intended to purge the need for pocket-emptying apparatus of hardware and network, the DAWT will allow enterprises to arrange load-testing software within the Google Cloud Platform. Google continues to launch missiles of technological progress at regular intervals to ensure consistent movement towards a tech-powered reality.
War of Cloud-Gods: Google, Amazon and AWS
If there was an eParliament, Microsoft, AWS and Google would be the monopolies of the Cloud department. The speculation about competency of Google to stand up against Microsoft and AWS has marked the discussions on tech-progress for last five years. Bagging enterprise customers was a late priority for Google. However, it had already laid the foundation of global network which netted the big names.
The winner of war is still undecided and though Google is slowly invading the lands of cloud computing, the annexed kingdoms (clients, provided services, developments) are loyal subjects which can stand the tests of technology. The latest Google initiations include: Partnership with CBT Nuggets on Google Cloud Platform training, Google Cloud Source Repositories, and association with JDA software, Docker Container technology and Google Cloud Console App.
Currently providing five Google Cloud Platform courses, CBT Nuggets also organizes a Google Cloud Platform certification exam to ensure that there is development of intellectual and conceptual skills required for innovations. Opening with 500mb of source-code storage space, the Google Cloud Source Repositories is playground for developers where a complementary working repository is set up when a user begins a new project. Catering to over 4,000 clients across the world, JDA software selected Google App Engine along with allied services as groundwork for forthcoming setups. The Docker Container Technology is also powered with the capacity for easy-transition of apps between varying architectures.

Google Cloud Console App
Though checkmate is still not in the vicinity, the latest move by Google in this war has been the establishment of Google Cloud Console App. With personalization features, the console is intertwined with the Cloud Monitoring allowing you to keep an eye on the condition of diverse services through a single window. You can also tap into the properties of different resources like IP, running state and zone to do a rain-check and make required changes. In case of occurrences in the App Engine and Compute Engine, you will receive prompt notifications consisting of monitoring-graphs and options for summoning core operations. A quick glance over the comments-section on the Google Cloud Platform blog reveals the speed with which the virtual world has taken to the Console. Still in the beta phase, Google has charged the app with following features as well: metric-info on different services, billing and networking details making it a tempting treat for the hosting-and-virtualization fans.
Google is an experience. And the new resident on the Google Experience Street is the Google Cloud Console App. Though there have been reports of fluctuating presence of the app on Google Play Store, the problem has been handled and the app is now available on the store here.
To know more about Suyati’s mobile technology services, write to services@suyati.com.

All you need to know about Sitefinity CMS hosting recommendations

Is Big Data too big to fall? Think Again.