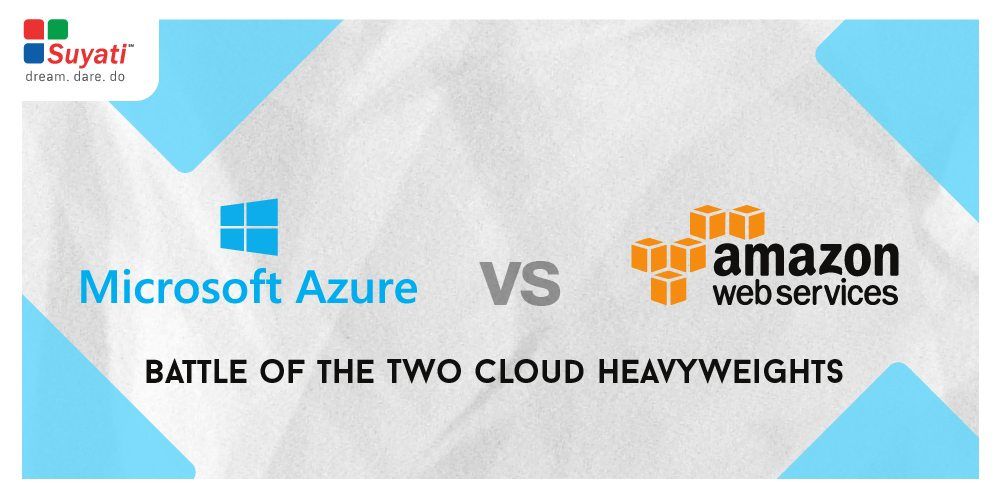 Microsoft Azure was announced in 2008; but the official launch came as late as 2010. The announcement saw Azure being titled as ‘Windows Azure’. In 2014 it was rechristened as Microsoft Azure.

Its arch rival, Amazon AWS, literally created the market from scratch by launching the Amazon Elastic Compute Cloud in August 2006. Even today it is regarded as the dominant player with a meaty 35% market share.

In the recent years, Microsoft Azure has risen from the ranks and emerged as a strong contender for the pole position of AWS. It is winning market share faster than any of its competitors like Google, IBM Cloud, Rackspace, Salesforce, and the likes.

The market share and growth rate between both the players are narrowing. It is only a matter of time before Microsoft Azure will close the gap and fight tooth and nail for the top market share.

In this blog, we are going to see how the Microsoft Azure is standing up to the competition that Amazon AWS is giving it.

A comparative analysis of what each platform offers in terms of IaaS offering:

AWS offerings can be broadly classified into compute, database management, content delivery and storage, networking, deployment, analytics and so on.

From the above comparison, you will notice that AWS and Azure have more or less similar features. But, there are few features that really set aside Azure and AWS apart from each other.

A Hybrid Approach To Cloud Scalability

This hybrid approach to cloud scalability multiples the productivity of developers since their applications can be hosted on both mediums. Azure also offers the benefit of choosing which parts of the application must remain on premises and which one should be moved to the cloud.

Amazon AWS is yet to establish itself as a strong hybrid cloud player. At present, AWS extends several hybrid cloud deployments such as Direct Connect, Storage Gateway, Virtual Private Cloud, VMware cloud and so on.

Related: Will Enterprise IT Win in the Microsoft Azure – Amazon Web Services Battle?

Cloud computing is not just for tech startups and B2C enterprises. Even government agencies are increasingly migrating to the cloud to automate several citizen-centric services and processes.

These cloud services are compliant with more security protocols like DISA, HIPAA,

Amazon with its first-mover advantage in the industry has been servicing government agencies with protocol compliant cloud services. Microsoft Azure has also cordoned off an entire section for government cloud services. However, it is yet to reach a level of maturity as compared to Amazon.

The economy of cloud scalability gets better with the right pricing. Both Amazon AWS and Microsoft Azure have resorted to a licensure model. Microsoft Azure gives corporate customers who rely on Microsoft products like SQL Server, Exchange Server, System Center Server, Skype, etc. a competitive advantage as they integrate with Azure easily.

The only down point for Azure is that it does not support RHEL (Red Hat Enterprise Linux), whereas AWS does extend support for RHEL. So if your business is heavily reliant on MS products, then Azure is a good fit. If RHEL is your choice of platform, then AWS is the only option.

A line-by-line cost comparison of both the cloud services is not fairly possible, simply because of the dynamic factors involved. However, both the licenses do provide their own respective cost calculators – Azure Pricing Calculator and AWS Simple Monthly Calculator that help you arrive at the cost depending on your platform requirements.

AWS has an upper hand in the industry due to its first-mover advantage. Their features are top-notch and have been refined over time according to customer requirements. However, Microsoft Azure does give a fitting reply to each of AWS features with its own offerings. Azure is also seen steadily increasing its feature list to close the gap on AWS.

Right now, they are the two dominant players in the cloud space. In the years to come, Google, Verizon, Rackspace and the likes can also be expected to join the top league.

We cannot say for sure which one is the best fit for all circumstances. It will vary from company to company and the platform they are already using for other IT services within the company. As for pricing, both AWS and Azure offer competitive pricing through their licenses.

For Microsoft customers, Azure will be a wiser choice due to its seamless integration. Microsoft is also seen to have a steady commitment towards making cloud it’s epicenter of business. Microsoft is slowly receding its customer-centric offerings and pouring in more investment into cloud-centric businesses. It is only a matter of time before Microsoft Azure will start eating into the market pie of AWS.

With these two giants gearing up and new entrants getting stronger, this battle is one that is going to last for long.

To let us know your thoughts – write in to services@suyati.com.

Why JavaScript continues to be the first choice of developers

Why CMOs are the key decision makers in technology spending today

What is the role of GCCs in developing Indian engineering...