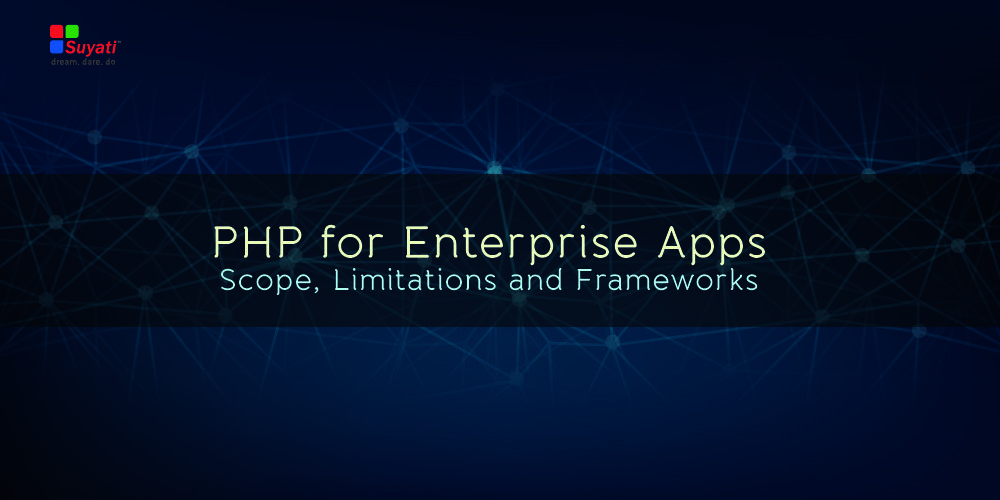 Building applications for enterprises is geared by values of strategic creativity than by values of experimentation. With apps which are intended to be mission-critical, one cannot experiment. There is a need to come up with action plans for three core organizational regions: security, production support and maintenance.

While most companies tend to consider their application to be enterprise PHP (since PHP is the most prominent programming language for websites), they often lack proper maintenance of the PHP stack.

An enterprise PHP is built securely and has the capacity to deliver high performance and scale. It is always available and has an unhindered support part (LTS and production). Having an updated PHP stack is significant for ensuring high performance, and security. Initially, PHP began with the goal of handling issues that were found while developing server-side apps on intranet or internet. But in the past few years, they have expanded its usage and popularity, accompanied by many potent partnerships (including those with Microsoft and Zend).

Is PHP ready to go enterprise-level?

The verdict is split. Many say that PHP has developed extensively and is capable of catering to enterprises while others points out to its shortcomings (like threaded execution, interpreted language, global extensions and language perception).

PHP is much like a formula-based glue. It backs up 19 databases (containing Microsoft SQL Server, Oracle, PostgreSQL, MySQL and SQLite) along with service-oriented architectural processes like XML-RPC and SOAP. There is space to work with .Net and Java classes comfortably as well.

Since PHP was built specifically for internet development, it has to mature to its next stage of programming adulthood to be able to cater to enterprises effectively. The primary competition for PHP is Java. On one hand, Java developers can be found holding more official backgrounds, PHP developers follow self-learning without any specific academic support. Earlier, while Java developers faced a stronger community life, PHP community consisting of its gradually self-organizing learners is also gaining affinity and weight among Java loyalists, majorly due to the unrelenting backing of Zend.

While PHP has significantly developed over the years, it hasn’t matured in a full-fledged manner yet. This has turned off many enterprises from adopting PHP as their ground for enterprise app. This is not to deny that PHP has steadily and slowly grown over the years.

PHP is open-source and cross-platform, which makes it an attractive option. It is suitable for creating dynamic websites and has many frameworks that reduce the time of development and enhances quality. Currently, many giant companies are using PHP. Looking at the track record, we can say that PHP is setting up its stage for enterprise and we can expect their adoption rates to be high soon.

PHP’s experience with big names like Oracle, Microsoft, IBM and the likes, has given an insight into the way enterprise systems work and readied it as an ecosystem to take on Java and .NET.

With partners like Microsoft and Rackspace, PHP can confront its biggest challenge. They can bring in an initially-missing structure and discipline to their work ethics. Zend supporting its runtime makes PHP the ideal option from the viewpoint of professionalization and commercialization. With the Zend framework, PHP seemed to have passed through the tumultuous puberty and is now ready to welcome lifestyle of a mature language.

PHP frameworks can be chosen on the basis of various levels of functionality, features and performance needs of the web app. The most suitable PHP frameworks for developing enterprise web-apps are: Laravel, Symfony, Phalcon, Yii, Slim, CakePHP, FuelPHP and Aura.

With the support of Zend and partners like Microsoft, PHP has come a long way, and on its way maturing into a program-language for enterprise apps. Check out Suyati’s journey with PHP over the years and connect to build an enterprise app!

Watch out for the AppExchange! It's booming with apps.