Role of digital signage in healthcare 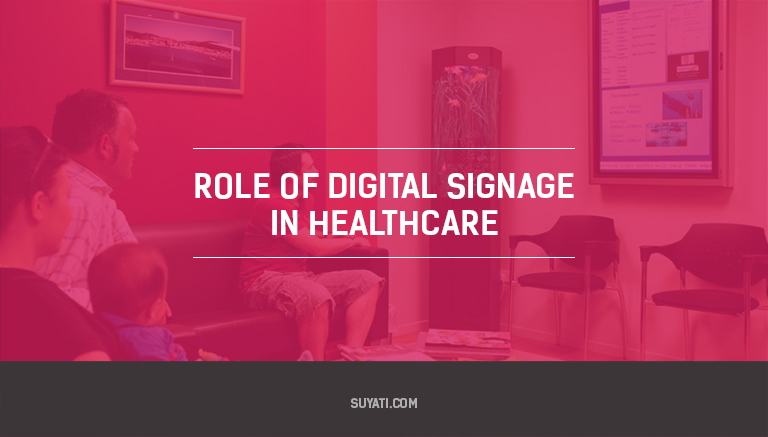 Digital signage has gradually increased its presence over the years, with reports declaring an increase in the overall sales volume of about 30% owing to them. Over 65% of the public watch digital videos and over 40% of the retail video-viewers prefer shopping stores that include video-displays. Despite these bright numbers, there are reports of digital stagnancy blotting the canvas.
A majority of the digital signage clients use their screen for selling advertising space, for providing data and for assisting way finding. Many smart-signs change the message depending on the time or other variables. However, more recently the rising trend is of screens that carry messages on healthy living to motivate the viewers towards physical and mental well-being.
Consider Accademia, a company that uses the digital signage for enhancing the care of patients in hospitals. They put up installation in Westminster and Chelsea Hospital during mid-2016, which are directed towards distracting the audience or motivating calmness by using new form of video art called “Living Photography”.
Led by CEO James Hope-Falkner, the enterprise had plans for partnership with CW+, a charitable organization of Chelsea and Westminster Hospital for forming department specific content through living photography. The scheduled installation “The Zoo” intended for the pediatric A-and-E department was to make use of about 14 screens where each would have displayed moving portraits of animals, aimed at relaxing both parents and children.
Why moving video-art?
The core reason for going with video, instead of painting, sculpture or photography is the power of movement. Video art allows us to communicate different emotions more efficiently over a period than any of the other art forms right now.
With movement, you can attract attention and retain it. Hope-Falkner talks about the healing effect of movement taking examples of fire and ocean. He points out that movement allows your mind to stop over-thinking or analyzing or worrying- to an extent having kinship to daydreaming.
It has been found that by creating distractions that positively impact the patient, the treatment times can be positively altered. When the anxiety levels are lower, there is a reduced perception of pain and the doctors are benefited through the calm atmosphere. This case has been demonstrated by CW+ through its initiative RELAX Anesthetics. These are tablet based-apps that provide music, art and games to calm down children while administering anesthesia before surgery. The use of app shows a considerable reduction in the anesthetic-induction time, increased success at cannulation in the first-attempt, reduced anxiety in the children and reduced stress in anesthetists. The RELAX Anesthetics initiative won the NHS England Innovation Acorn Challenge Award.
The idea of using art to heal and better health is not a novel idea. It has been around for a long time, with the most primitive trace in the use of images for recovery of the wounded soldiers. Samuel Begg, prominent British artist says:
“A novel use of the cinematograph has been introduced into certain American base hospitals in France. For the amusement of wounded men who are unable to sit up or leave their beds, pictures are thrown on the ceiling above their beds by means of portable projectors. Thus they are enabled to enjoy the antics of Charlie Chaplin and other heroes and heroines of the ‘movies,’ like their more fortunate comrades, who can move about and attend the ordinary type of cinema entertainment. How great a boon this ingenious device has proved to bedridden patients may be easily realized by anyone who has ever spent long and tedious hours in bed watching the vagaries of flies crawling on a ceiling.”
Interconnecting Healing and Art
Jamie Beck and Kevin Burg, the founders of term ‘cinemagraph’ point out how art creates a healing effect by altering our perception of space and time. They talk about the expanding of a short moment into eternity and how that becomes a ground for growing new thinking patterns. You must have noticed the differing points of focus your mind travels through the time. At some points, you will be aware of the environment and at times of emotional heaviness, you might be able to focus only on one thing. These emotional states become the elements that video art form tries to explore.
Easy on the pocket and on the mind!
Earlier, putting up digital signage ran over the budget of hospitals that depended on public funds. There also had to be pocket-heavy screens and IT resellers. Since such resources were not affordable, public-funded hospitals ended up with screens presenting dull content with the antiquated videos running on a loop.
With digital signage that is based on cloud, NFP and healthcare organizations can actively benefit from its advantages. There is no need for smart TV. One only needs to set up the software and use an Amazon Fire-Stick or the like to establish digital signage.
Previously, digital signage was a luxury of the rich companies that could afford the software and infrastructure for it. Now it has become an evolution that brings in easy-to-use and pocket-friendly tools that can be used commonly and creatively by different organizations! Let us brighten up our screens to brighten up lives!
Leave your comments on this post. To know more about Suyati’s expertise in healthcare technologies, please write to services@suyati.com.

Tips to select the right cloud service provider for your enterprise

Do you need a separate CX Team at your company?

Suyatian Dreams- the journey of our first magazine from thought...