How Salesforce Einstein stands out as an AI platform 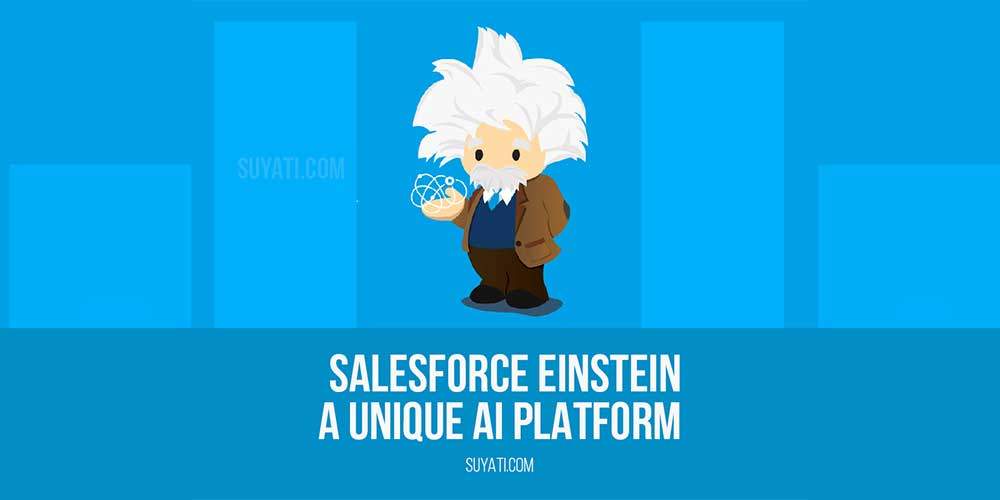 Salesforce launched Einstein in mid-September, with Marc Benioff calling it “every Salesforce customer’s data scientist—right in the Salesforce platform”. Salesforce Einstein is a tool-box of high-quality services that introduce Artificial Intelligence (AI) capacities smoothly into the customer lifecycle, revolutionizing the CRM of companies. Einstein was the biggest hit of Dreamforce 2016. Though labeled a conference, Dreamforce voiced the spirit of innovation and diversity throughout its events more in line of a technology-festival, with involvement of figures in the league of Thich Nhat Hanh (who guided walking-meditations), rapper will.i.am and model Christy Turlington Burns. Since the news of Einstein arrived to us in August itself, did its shine wear off and its presence at Dreamforce ended up a fading echo? How innovative does Einstein look today, relative to the technological advances displayed at Dreamforce 2016? What does the future hold for Einstein? Read on.

Einstein in the Crowded AI-Hall

Salesforce’s announcement of Einstein’s launch came hours before Oracle kick started its OpenWorld conference. The strongest motivation for such a move seems to be simply a power-play, with Benioff intending to stall Oracle’s unveiling of the AI-kind technology (Adaptive Intelligence Applications). His announcement arrived at a time sandwiched between big-words by Salesforce’s rivals: Microsoft CEO Satya Nadella showcased an AI-oriented keynote at Microsoft Ignite (Atlanta) and IBM planned to disclose DataWorks at Strata & Hadoop World event (New York City), the next day.

If you push back the dates a little further, we will bump into Mark Barrenechea (OpenText CEO) around late-July, spelling the coming of its AI Predictive Analytics machine Magellan. A month before, Sugar CRM launched its Intelligent CRM- this was intended to use Sugar Intelligence Service, in fusion with the data from company CRM to build a 360° view of customers.

With so many candidates crowding the claims on AI-centric future, where does Einstein stand? Is it really that different?

Is “Einstein” really that different?

Salesforce intends to incorporate Einstein throughout its platform. The demonstrations of its integration included prediction of sales outcome (like probability of expected revenue and closing), suggestions for customer service solutions and generation of flexible and predictive journeys for prospects (according to their behavior). Salesforce has mystified the arrival of Einstein to such an extent that over time, the mist has faded and questions about pricing structures and rollout timeframes are afloat. Without concrete answers to these doubts, Einstein is still only a candidate- albeit a loud one in the crowded AI hall.

There are broadly two camps on whether Einstein really stands out from rest of the crowd: one side says that it is only a conceptual working prototype which would take years to get to the point of being applied in a full-fledged manner and the other side claims that Einstein is ready for the world and will continually develop as it learns through its time here. Which side do we target our dart?

In a piece “Salesforce Dreamforce 2016- It’s about the platform, not Einstein”, Holger Mueller (Vice President and Senior Analyst at Constellation Research) pointed out how Einstein would not be ready even for the next year’s Dreamforce, adding, “Basically Salesforce has put all predictive analytics (or I call it ‘true’ analytics) under the Einstein marketing umbrella. And now needs to figure out more on what the platform is, how data will be aggregated, where that all will run, what it means for privacy and security etc.”

R.”Ray”, the Founder of Constellation Research took a similar stand remarking that Einstein was at a point where Chatter was when it was launched around 2010. He also added that while the Salesforce’s technology has reached the type of development Einstein needs, Salesforce still needs to work on the software to complete it by the coming release date. The technology includes the spree of acquisitions Salesforce underwent including: RelateIQ (bringing together data science and CRM), MinHash (data science and assistive intelligence for companies), Tempo AI (smart-calendar app), Krux (data management platform), PredictionIO (aid for machine learning) and MetaMind (aid for deep learning).

Slow but a Sure Win for AI (and Salesforce too!)

Even though we are walking slowly towards integrating AI completely into our way of living, the predictions point out that our future is bright. The market size for AI is expected to reach $36 billion by 2025.

Moreover, while there might be “what-ifs” for Einstein, it is commendable that Einstein is not just another product in the Salesforce ecosystem. It is a layer being introduced to all the products as an assistant.

Suyati has presented a session at Dreamforce 2016, the world’s largest cloud conference. Click here to know more about this.

Share your thoughts about Einstein in the comments box given below. Please mail to services@suyati.com for any Salesforce related enquiries.

Five CX Trends that will Change Insurance in 2020