How Salesforce continues to be the market leader in CRM space 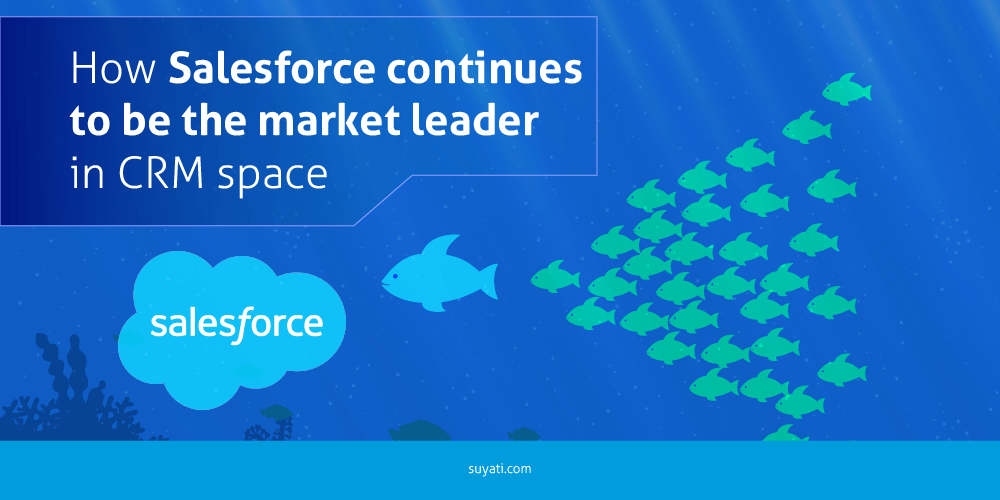 All good things come to an end, goes the conventional wisdom. This is more so in the case of technology, where new developments sound the death-knell for legacy solutions.

Are there exceptions to this rule? Salesforce, the market leader in the CRM space, has had an unchallenged run at the top for quite a while now. Here are FOUR reasons why Salesforce is an exception.

One of the oft-touted criticisms against Salesforce is its high price-point, when there are cheaper alternatives around. In fact, Salesforce increased its price by about 20% last year, a strategy which many may regard as shooting itself in the foot in today’s age of open-source and freeware.

However, the fact is Salesforce succeeds in retaining a large customer base and continues to offer the best value for money. Salesforce has been smart to keep on reinventing itself every season, to ensure the value offering remains unbeatable. A case in point is the recent Spring 2017 release that offers big improvements to Einstein, the recently launched Artificial Intelligence engine, among other productivity and efficiency enhancing improvements. Such improvements are not an ad-hoc or one-off effort either, meaning Salesforce CRM will always have the latest updates to stay relevant in a highly competitive space.

The AppExchange offers unbridled flexibility as well, allowing enterprises to pick and choose the functionality of service they require. Apart from internally developed apps, a host of third-party providers offer highly intuitive apps, making the Salesforce space a vibrant ecosystem that extends to not just customers, but also partners, third-party developers, and more.

Cloud-based SaaS offerings are the future of the web, offering users unimaginable convenience in the form of easy scalability, unmatched customization, resilience, and anytime availability. The “pay-as-you-go” approach has disrupted the IT industry by making technology immensely affordable and virtually eliminating entry barriers.

SaaS is the backbone for the Salesforce platform, and Salesforce has always been a pioneer in introducing the latest cloud-based innovation to its CRM. As improvements in technology propel SaaS to become even more mainstream and the default way of computing, Salesforce too will grow in prominence side-by-side.

With many enterprises now developing SaaS integration platforms for mission-critical applications, Salesforce, the leading SaaS CRM by a country mile, will become even more integrated to the enterprise scheme of things.

Salesforce is one of the proponents of SaaS-based CRM, which has relegated conventional on-premises solutions to the backstage. The cloud-based CRM with integrated tools offers a far dynamic alternative to spreadsheets and address books, which accounted for its rapid surge in popularity.

However, conventional SaaS based CRM technology, being essentially DIY in nature and requiring manual data collection, are themselves on the receiving end now, facing a stiff challenge from the new generation of automated and intelligent CRMs that offer easily configurable products and remain up-to-date always.

Salesforce is up to the task though. Salesforce automation (SFA) automates key business tasks such as sales processing, inventory control and tracking customer details, allowing businesses to maximize the value of their relationships with customers, without having to waste time on routine, manual processes. The greater emphasis on artificial intelligence and machine learning in the recent Spring 2017 release means Salesforce is well on its way to ensure the technology gathers all the data, identifies insights, and makes productive decisions, all on its own.

Constantly reinventing products and processes is critical to remaining relevant to customers. A strong leadership, and a company culture that provides the right ecosystem is needed for this to happen. Salesforce is strong on both these fronts. Marc Benioff, the CEO, has been in the game for several years now, going back to the days when Java was just starting off. The true test of a company’s resilience is its ability to withstand technical shocks that change the rules of the game, and Salesforce has survived several such paradigm changes.

Salesforce actively promotes a culture of flexibility, collaboration, and iteration. The sense of urgency that permeates in the company enables it to move quickly and react to changes as it unfolds, in double-quick time. Salesforce believes in a culture of performance, and is constantly looking for what needs to be changed to stay relevant.

Salesforce innovates, but the basis of innovation is not about how cool it could be made, but always about the customer. What gets developed or added depends on whether the customer wants it or not.

This is because Salesforce’s innovation is not a sporadic burst of energy, or a knee-jerk reaction to external developments. It is rather a methodical thought-out process. The annual Dreamforce conference regularly lists out plans for the year ahead. The Salesforce1 mobile app, which takes the technology forward and entrenches a baseline for many years in the future is a case in point.

It is very hard for such a company to go down. The proof of the pudding is in the eating. Users of the Sales cloud report a 43% lead conversion, 44% sales productivity, and 37% revenue. The company has already achieved a $6 billion revenue run rate, with the possibility of hitting the $7 billion mark in 2017. Salesforce is well on its way to becoming a $10 billion company.

It is easier to get to the top than to stay there. How is Salesforce sustaining its dominance in the cloud arena? Share your thoughts. To know more about Suyati’s Salesforce CoE, write to services@suyati.com.

What are the Benefits of IoT integration with enterprise apps?

Reap the benefits of Cloud in Retail

My Journey at Suyati : Shijo George

The Suyatian Corporate Anthem – a song to match our...