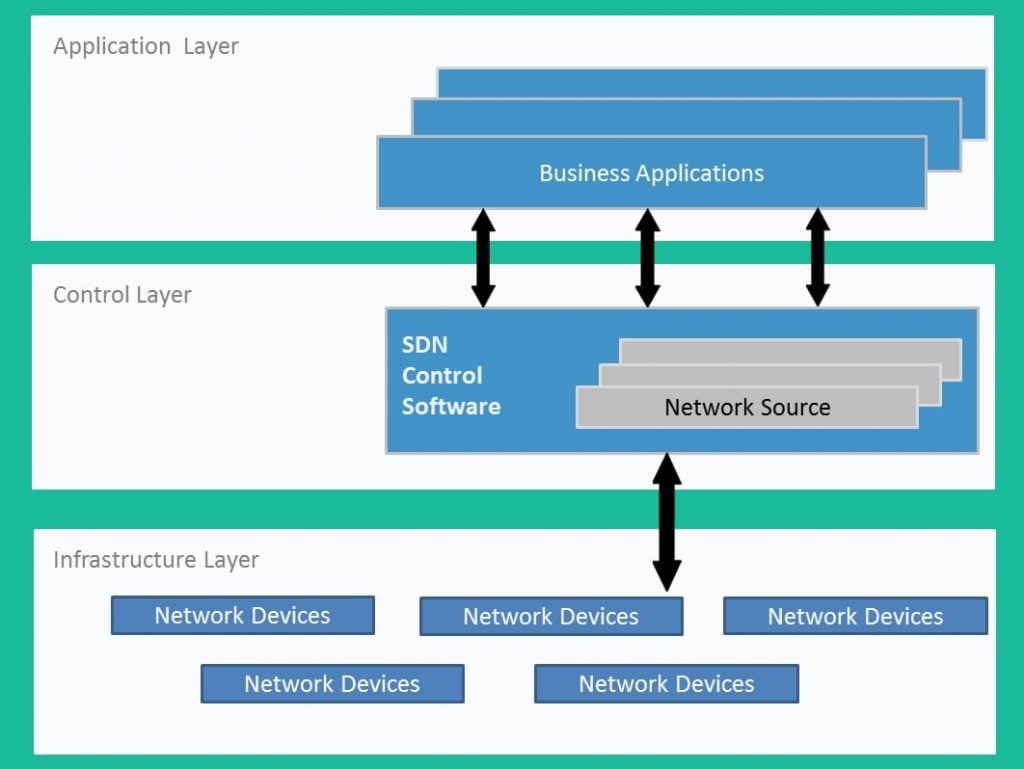 The hardware-based approach to networking has been relegated to the past, and it’s now definitely the time for a software-dependent scenario. The change has been gradually happening over the last couple of decades, and everyone in the industry has to transform their business infrastructure accordingly. This is a result of increasing demands that are only forecast to grow with the explosion of Big Data, IoT and the increase in mobile devices.

SDN and NFV are two of the terms that have become familiar to industry stalwarts and it could even be said that both these technologies are driving the transition towards a software-centric future. Let us try to understand these terms and the relationship between them.

According to the Open Networking Foundation(ONF), SDN is “the physical separation of the network control plane from the forwarding plane, and where a control plane controls several devices.” The ONF is an organization that is dedicated to the adoption and implementation of SDN, and is also developing standards such as OpenFlow to help bring this architecture to more customers worldwide.

The ONF experts opine that many recent trends such as the rise of cloud services, big data, consumerization of IT and changing traffic patterns are the drivers towards a new network paradigm. Some of the advantages offered by the SDN architecture are:

Central view of network: SDN allows easy management of network intelligence from a central location, due to the software-based controllers that unify the logic of the entire network.

Dynamic flow adjustment: Network administrators would be able to manage the flow of traffic all over the network, as forwarding is now abstracted from the control plane.

Programmable network control: Due to the separation of forwarding from the controlling mechanism, SDN also makes it possible to directly program network control.

Quick network configuration: A central controller allows fast configuration and management of resources in the network, also including optimizing and security needs.

Open standards: Your programmers no longer needs to figure out varied proprietary protocols, as using SDN with open standards would simplify the programming and managing needs of your network.

SDN helps tackle the hardware-centric network issues such as difficulty in addressing scaling needs, dependence on specific vendors, and over-complex and tough to manage networks.

Virtualization is a great approach for most businesses, as it has a major impact on resource utilization. As this article mentions, Capital Expenditure (CAPEX) and Operating Expenditure (OPEX) would be significantly cut down due to reduction in equipment costs and lowering of power consumption. Telecom is the focus of NFV as this is a majorly impacted segment today, with the increase in customer base and the rise in the number of devices.

Which parts of the network can be virtualized?

Switching: The physical infrastructure such as network ports would be connected to a complete virtual layer including ports, servers and routers in the virtual space.

Network appliances: There is now an option to move from boxes for different appliances to their virtual form, and this is seen in security functions such as gateways or firewalls.

Network services: Most of the network monitoring services, including traffic analysis and load balancing can now be done in the virtual space.

Applications: With the increase in usage of devices, the prevalence of apps or applications in the virtual space has also gone up. Development in the cloud is also another factor that has added to this.

SDN and NFV: Complementing each other

It can be seen from the descriptions above that SDN is instrumental in separating the layers of control and forwarding in a network, thereby increasing flexibility. This would also enable easier innovation and changes to the network. NFV, along with reducing CAPEX and OPEX, helps in managing network complexity and improving scalability. It could also be said that SDN is primarily affecting the data center and cloud computing functions, while telecom operators would be the prominent players for NFV. The strong relationship between the implementation of these concepts can also be seen by this collaboration that was announced between ETSI and ONF, to accelerate the development of NFV with SDN support.

CloudNFV is an initiative that brings together cloud-based deployments using an OpenStack model into the NFV concept. It also uses “derived operations” to facilitate management of networks and allows easy definition of network connections. It stays aligned with the required standards, while using SDN and NFV concepts with the power of the cloud behind it.

Did you find this article interesting? Please do let us know in the comments below.

BIG DATA IS A BIG DEAL – AND SO IS DIGITAL PRIVACY

Top 10 Things to Consider When Setting up Your Ektron...