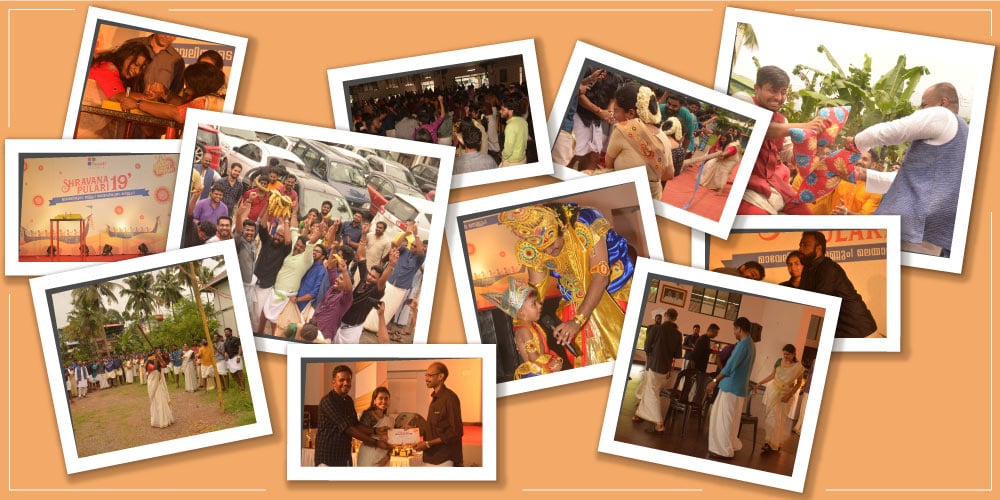 Onam. One festival that every Malayalee looks forward with childlike enthusiasm. At Suyati, we were looking forward to Onam 2019 with double the expectations.

August 2018, when the whole State was ravished by the raging floods, we had no heart to celebrate Onam. We had planned way back in the beginning of 2019 that the next Onam would double down on everything. Double the grandeur, double the fun and double the merry.

Here are some glimpses of how ‘Shravana Pulari’19’ went.

The big stage all set for the grand celebration and action.

Began with a firm handshake. Ended up as a tough arm wrestling competition. Mansoor didn’t see that coming from Anoop.

Maveli was hiring for a replacement when this young (read: fresher) applicant walked in.

Mavelli: “Why do you think you are suitable for this role?”.

Applicant: “I am cuter than you. Give me an opportunity and I will grow the required goodwill and potbelly”.

Be it an argument or a tug of war competition, you don’t want to be on the other side of this team.

Oru kula pazham a.k.a the traditional trophy for the winning team of men’s tug of war competition.

Jab, jab, faceplant. A furious (yet comical) pillow fight between Ashutosh and Prakash. If only pillow fight was an Olympic Sport, Suyati can represent the country.

Miss. Adheena taking a hit at the Uriyadi pot.

Our executive team walks with a strategic mind even while playing musical chair a.k.a kasera kali.

Ramesh had got his strategy right to win the musical chair contest.

Kerala-style disco set to the furious beats of Kalashakottu. If you can spot the Chendamelam players in the pic.

Trophies for the sport events that we had organized earlier during the year.

Until another Onam comes, Suyati will cherish the fond memories of Shravana Pular’19.

How to optimize your CMS for better customer experience

Online Proctoring: Need of the Hour for Students...

Putting AI at the Core: Here’s How analytics...

How Cloud enables Businesses to Survive and thrive...

Does eCommerce Success spell the end of Physical Stores?