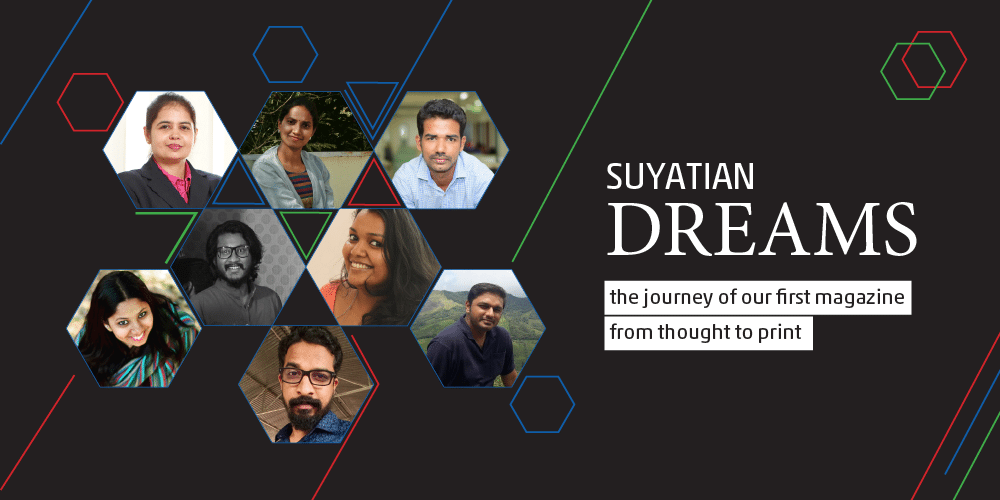 I was minding my own business (and that of Suyati’s) when Unni walked up to me and said he needed a small help. I said “Sure”. Taking advantage of my nice nature, Unni pounced on my promise and said, “We need you to edit a magazine. It will have articles and stories written by our team.”

I actually liked the idea. I said again, “Sure! Who else is helping me with this?” Before I could complete the sentence, Unni disappeared. For a second, I thought I imagined the whole conversation until I saw Unni at the Anniversary Program committee meeting a few days later. He had put my name against the Suyati Magazine project. Luckily, Dipu’s name was next to mine. And that is also when I realized we were supposed to launch a complete magazine in less than 2 months – on April 25, the day we were celebrating Suyati’s 8th anniversary.

My gut reaction? To stand firm and say, “No way.” Then I had visions of Varghese, our BornToWin leadership trainer screaming in my ears that “I can”. I put up a brave face at the meeting and said, “Sure, not a problem.”

We had a few ideas from the team for the magazine name. Some of them included CHRYSALIS, SHIKHAR and ECHO, but Dipu’s DREAMS won this battle. Armed with a name, and the confidence that Shalin had some magazine design experience, we sat down for our first brainstorming session.

For those who have not met Dipu, you need to know this kid has some serious treasure trove of creativity in him. He came out with one amazing idea after the other – divide the magazine into 3 sections, interview key personalities at Suyati, create a magazine cover to reflect the depth of creativity in our team…by the time he was done talking, I knew we had a potential winner on our hands.

The articles, stories, poems, interviews, sketches, photos slowly trickled in. The magazine has a total of 29 fiction and non-fiction entries, along with 34 photos and sketches. We were thrilled! Thanks to each and every contributor and artist who took the time to send their entries in.

Once I had edited all the articles and poems, I asked Roshna to step in to help with compiling and editing of the author bios. You can see for yourself the creativity and style that she has added to this must-read feature at the end of our magazine.

Muktha was roped in as an interviewer and she stepped up instantly. She chased the security guards and the chechis down, and got them to share their beautiful stories. She even made the time to interview Mansoor and Vinod, even though I knew she had to work on Mukund’s presentation for the anniversary day, and on the treasure hunt. Kudos to her spirit!

Now to design the magazine. When I came in to work one morning, Dipu asked if I wanted to see the layout, which was just being designed. Between Shalin and him, they had completed almost 50% of the articles. I went over to Shalin’s desk and she started to click through the pages. I was blown away by the sheer quality of her work. I had not, even in my wildest imagination, expected the magazine to be presented like this. Wow. And since Dipu did the same, double wow!

Now to present the magazine online. In stepped Anuraj. He waved a few of his design magic wands, asked Dama to wave his website magic wand, quickly roped in Ratheesh to help with the online publishing and within a day, the initial draft was online………slickly moving from one page to another.

All that was left was to fine-tune the design and layout, proof read the magazine from end to end, and then layout the index page. The only stumbling block was in publishing the Malayalam articles. Our personal regrets to Nabeel, Bhuvana, Akhil, Lekha and Soumya – we just couldn’t figure out a way to import their articles.

And we went LIVE on May 3rd at http://suyatiandreams.suyati.com/. We are still fixing some of the errors and mistakes, so please do send us feedback on what could be improved. We hope to fix all the issues before we print the magazine end of this month.

If there is one thing that I learnt from this experience, it is the power of “I can.” I sincerely believe there is no other way we could have created this gigantic piece of Art in such a short time, or got together such a disparate and talented team on one page – well, 88 pages literally.

Kudos to the Magazine team. I look forward to editing a better and more creative edition next year. Unless of course, Unni can rope in a more naïve or unsuspecting editor to replace me!

The treasure hunt at Suyati – adventure, fun, strategy and innovation!

How to Integrate Data for Digital Transformation Success

Top 5 metrics for your FOSS community to track