The best open source wearables of 2015 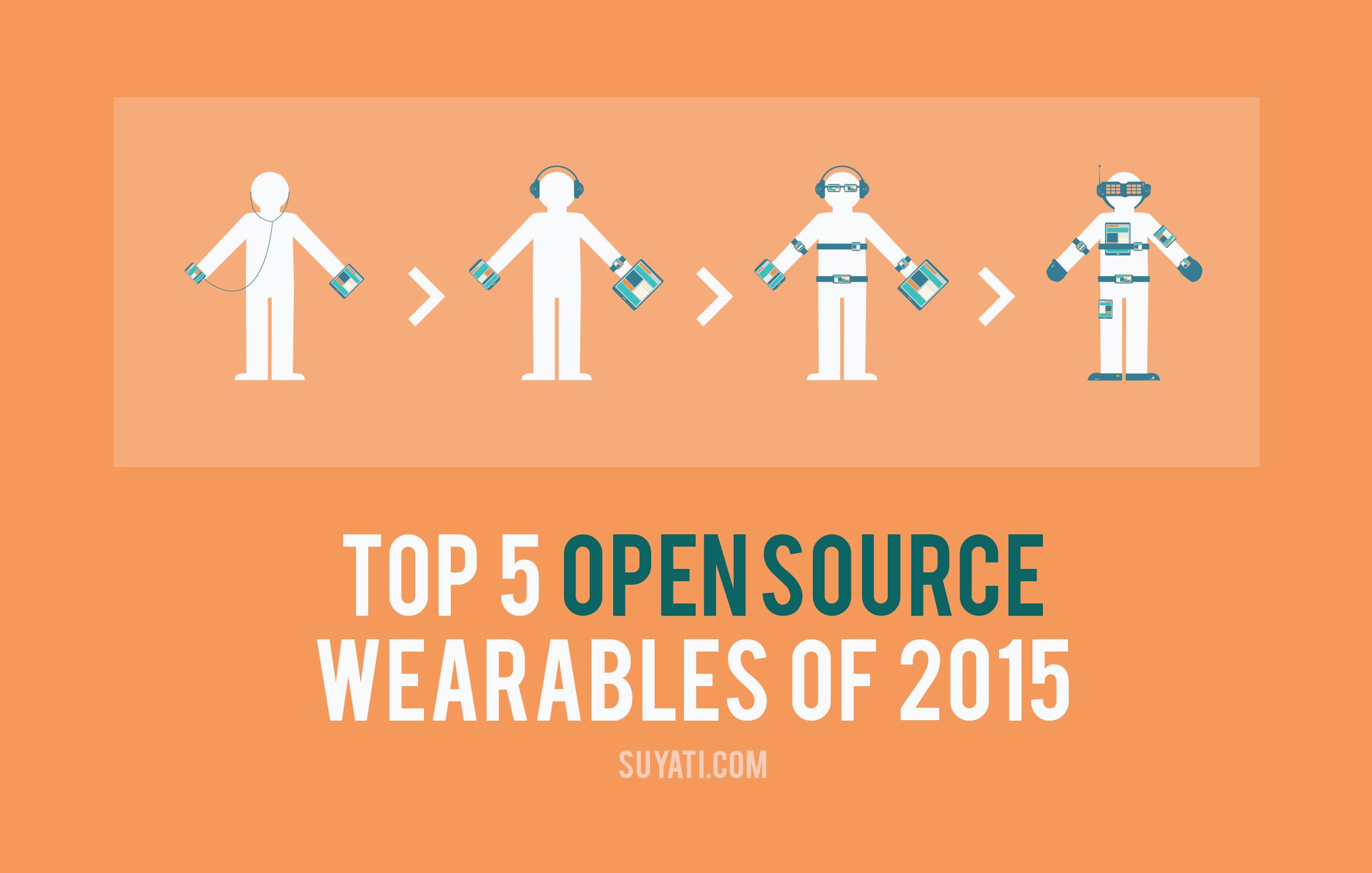 After smartphones hit the market, there is a gradual trend of everyday devices getting prefixed ‘smart’. Smart TV, smart watches, smart glasses and what not. As you can see, even portable and wearable devices have become smart. Anyway, we are not going to discuss smart devices but rather wearables, specifically open source wearables that made a mark in 2015. So don’t get carried away with the term ‘smart’, it was only used to show how technology is ushering us to new paths of innovation. Bear this in mind, not all wearables today are smart!

Wearable devices, wearable electronics or simply wearables are electronic devices that can be worn as a clothing or accessory on our bodies. Wearable devices can be compared with portable devices like laptops and mobiles as they are both portable in nature and generally perform either same or similar computing tasks. An important point to note is that not all wearables are inferior to the portable technology we have in computers and smart phones. A good example is the sensory and scanning feature they can provide such as biofeedback and physiological function tracking which cannot be matched by hand-held or other portable technology.
As aforementioned not all wearables are smart. They become smart only when they are able to connect, share and interact with their users as well as other smart devices. Nonetheless, most of the wearables support some kind of communication capability that allows the users access to information in real time.
Wearable technology is popularly used in medicine, health, ageing and fitness which include fitness tracking, posture improvement, sunscreen reminders, muscle-sensing gesture control and so on.  Wearables have influence on other fields like education, transportation, enterprise, finance, gaming and music. Examples of wearables not only include gadgets like watches and glasses but also clothing and accessories like e-textiles, smart fabrics, headbands, caps and jewelry like rings and bracelets.

Open source wearable technology makes it possible for us to envision a future of fashion tech offering ample data privacy of biometric sensor data. While talking about open source wearable equipment, the first thing that comes to mind is Adafruit, an open source hardware company founded in 2005 which provide an online platform for learning electronics and helping you create DIY electronic projects irrespective of age and skill levels. Adafruit now offers tools, equipment and electronics that are selected, tested and approved personally by its founder Limor Fried.

Flora is a wearable electronics platform that is brought out by Adafruit to empower other wearable projects. It is a round, sewable, Arduino-compatible microcontroller that can be better understood and used by relying on Adafruit’s support, tutorials and projects. Flora v2 – released on 12 May, 2015 – features a micro-USB port instead of a mini-USB port and has a RGB NeoPixel installed which supports colorful lighting.

SMSsenger bag uses Flex NeoPixel Matrix along with Flora and Fona to let you scroll text messages on your bag, jacket or similar surface. The working isn’t too complex with addressable LED matrix displaying text messages received to onboard FONA open source cell phone module. Adafruit provides guidance regarding circuits, code and sewing along with video and pictures to help any intermediate develop this wearable project.

The Flora Bluefruit LE enables Bluetooth Low Energy connectivity to your wearable Flora project. You can either use Bluefruit iOS App or Android App to add wireless connectivity to your phone or tablet. You can send commands wirelessly using this within 10 minutes and all it takes is sewing 4 traces or soldering 4 wires. With the Flora BLE you can pick colors of the LEDs using just your smart phone as controller. You can have a GPS or an 8-button control game pad with this.

Made With Code LED Dress

Like Adafruit, Made With Code is also a women-centered organization that focuses on Computer Science. Made With Code is a Google initiative that encourages girls to take up coding. Made With Code and ZAC Zac Posen teamed up to show that the intersection of computer science and the fashion industry can cross boundaries. The LED design was coded by technologist, Maddy Maxey, incorporating animations designed by a group of girls from around the world. It came to be known as the ‘little black dress’ of the digital age. The hardware of this LED Dress included Neopixels, Adafruit Flora and Adafruit Flex Boards. The dress debuted in the runway of New York Fashion Week in September, 2015.

Arduino Gemma is a miniature wearable microcontroller board brought out by Adafruit. It is based on ATtiny85 and can be connected to a computer with a USB cable or can be powered using a battery. Currently, Adafruit GEMMA v2 is available in the market. Information and guidance on building your own board is provided as pdf and zip files in the official Arduino website. This miniature wearable electronic platform can control NeoPixels, read simple sensors and can be easily incorporated in wearable projects.

5 ways in which Big Data can help the hospitality industry

Top Seven Salesforce Implementation Challenges and How to...

Ruby vs. Python: Which is the ideal platform for web...