The New Architecture and Database features of Magento 2.0 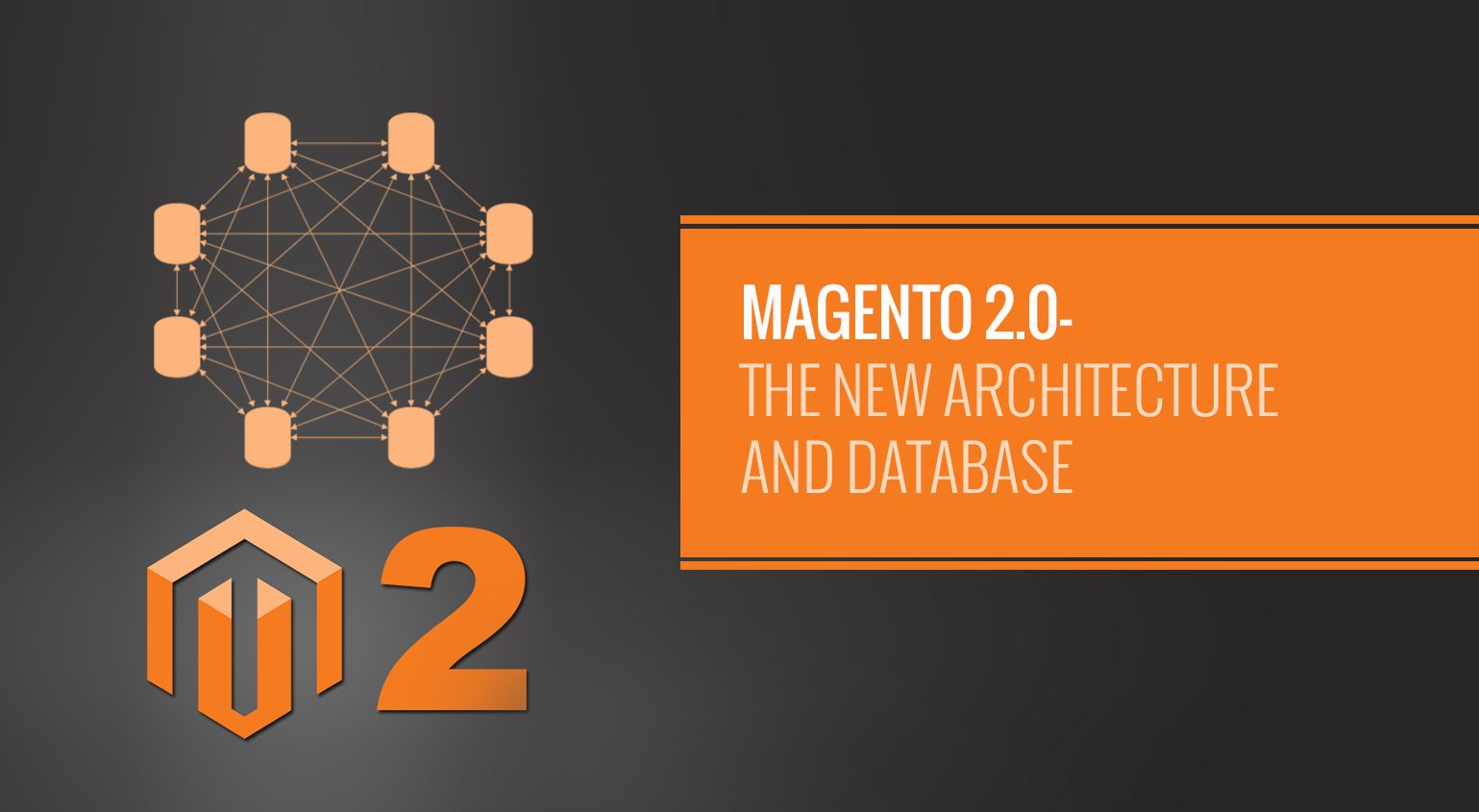 The much awaited Magento 2.0 is on the cusp of official release. It promises to be a major upgrade from the existing 1.x versions, involving a comprehensive revamp of legacy code, and introducing new features such as a powerful visual editor and “containers.” Magento 2.0 promises considerable performance improvements as well.
Let us take a look at some of the new features introduced to Magento 2.0.

Improvements in Productivity and Efficiency

All the powerful features notwithstanding, a major issue with the existing Magento is its resource hogging nature. Magento 2.0 seeks to improve efficiency and productivity considerably to overcome this drawback.
A database-driven site such as Magento usually makes around 100+ database calls to build a single page, and pre-renders all such pages into basic HTML. Such actions hog resources, and slow down page loads. Magento 2.0 extends the full page caching feature, now available in Enterprise version to the Community platform as well, to quicken the process substantially. Still better, the new version supports proactive caching or materialization in production mode. Magento 2.0 offers compatibility with Varnish 4, and Facebook’s HHVM 3.6 (Hip Hop Virtual Machine), allowing it to compile PHP code on the go for even faster page load times. Varnish Cache is the leading HTTP accelerator technology, responsible for caching common requests.
All these improvements would reduce page load times from normal 5 to 8 seconds, to as low as 1 to 2 seconds. Magento 2.0 would be at least 20% faster for end users, compared to the prevailing Magento 1.x versions. Shoppers will be able to add products to the shopping cart about 52% faster compared to the current versions.
Faster load times lessen the load on the server, allowing the site to handle more traffic, besides improving end user experience. Such improvements would have a spin-off effect in the webpage getting to the top of organic search listings, for fast page load is a key factor that Google uses in its algorithm to rank websites.
Magento now supports 500,000 page views per hour. Magento 2.0 would be capable of supporting a whopping 10 million catalog pages per hour, consuming the same resources.
Magento 2.0 promises faster time to market with lower development costs.

Magento 2.0’s new Visual design editor offers an easy drag and drop interface. Making edits to Magento Page Layouts now becomes a simple task, which developers may do directly from the Admin panel. Hitherto, the same task required specialized technical knowledge.
Magento 2.0 also introduces containers, a block-level visually distinguished HTML element, which may be manipulated by the design editor. Containers do not have to own content, but may consist of other blocks or containers. Containers offer a new logical structure to clearly organize blocks and define sections of the layout.

A big drawback of Magento 1.x was its inability to do bulk upload of product details. Though Magento 2.0 still does not allow bulk uploads, it is now easier to make wholesale changes to product details.
Magento 2.0 allows creating a grid view for Page Titles, SKU and Inventory levels, and other elements, in the admin area, allowing editing of the information on the page itself, just as in MS-Excel.
Also, it is now possible to apply a single set of image to all SKU, by attributes. There is also an easy way to create product configurations, using the visual editor to create attribute values such as checkboxes.

Database Management
Magento’s database has a single MySQL database for performing all the versatile functionalities, including scaling out of front-end Web servers, placing content on CDNs, and more. Magento 2.0 allows having a standalone database, reducing the load on the MySQL database. Developers may now serve the front end content from the MySQL database and use a secondary, standalone database for the checkout process. This improves the scalability of the website, and enables Product and Order management simultaneously.
Improved Checkout
Magento 2.0 improves the checkout flow. As of now, Magento offers “Checkout as a Guest” or “Login to Your Account or Create New Account” option. When a user checks out as a guest, the information is lost, and is not retrievable in the next time round.
Most users do not prefer setting up an account when they make an online purchase. They do so only if there is no workaround. The previous ‘Magento one page simplified checkout extensions’ were a failure, owing to errors generated during the shipping or payment process.
Magento 2.0 now offers a robust solution by re-imaging the checkout process. The end users can now check-out by just entering their email address. Password is optional.
There are tweaks in the checkout form as well, making it leaner. The “Zip code” field moves ahead of the “City” and “State” fields (for US), thereby pre-populating “City” and “State” fields based on the zip code. This also allows the customer to have accurate shipping rates calculated automatically, without another JavaScript reload.
The superfluous need to ask for credit card brand is also done away with. The number alone suffices, for any card number that starts with “3” is an Amex card, cards starting with “4” are Visa, and cards starting with “5” are MasterCard.
Payment Gateway Update
Magento 2.0 comes with some improvements in the payment process. Magento is now strongly integrated with PayPal, Authorize.Net Braintree, CyberSource, and Worldpay, and other third-party payment processors. It is now possible to have a third-party hosted payment page such as PayPal, redirecting the end user to a page on a completely different domain. Likewise, it is also possible to have third party embedded API with direct post.
An inline iframe allows payment form to be hosted by a third party, but still be embedded in the checkout process. Having the credit card payment page area hosted elsewhere mitigates the risks associated with storing credit card details on the website servers.
Improved Backend Processes
Magento 2.0 brings forth several other backend or under-the-hood improvements:
Magento 2.0 does not use Bootstrap. It packs in only a few initial instructions to load the program, and introduces the rest of the program later from an external source. It rather uses its own LESS and CSS in the theme core, which the publisher needs to identify and publish. LESS makes it possible for developers to load custom theme faster and easier, and speeds up page load.
Magento 2.0 improves the file structure by placing everything under the app structure, providing every module with its own VIEW directory. This makes it possible for developers to experiment with customization without the risk of affecting functionality of the core site.
Magento uses Zend Framework, but the existing versions are confusing in that the directory’s structure is different from that of the Zend Framework. Magento 2.0 resolves this confusion, making the directory structure similar to Zend Framework. This contributes to easier theme development and provides a modular approach to developing Layout Templates, CSS, Images, and JavaScript.
Magento 2.0 also changes the factory names to call models, helpers, and blocks, with full class names. Magento offers migration tools that make the changes automatically, sparing developers of a laborious manual process. It uses jQuery library as its default JavaScript library, thereby eliminating prototype and jQuery conflict that vexes users. Prototype however is still included with Magento 2.0 for those who want it.

Installation is easy
Magento 2.0 facilitates a seamless installation. The new standalone installer checks for pre-requisites before starting the installation process, facilitating a more robust and faster installation. The installer is now an independent script from the application, making it possible for system integrators to create standard deployments easily.
Change-Over
Magento 2.0 is not backward compatible, meaning that if users having any modules still using the deprecated code, need to update their code to avoid the risk of being kept out.
Magento has promised a data migration tool that will migrate product, order, and customer data, and also CMS pages, store configurations, EAV tables, customer passwords, and URL rewrites from the legacy Magento 1.9 to Magento 2.0. However, extensions, design themes, and any customizations done to the Magento framework however would need to be completely re-built or re-downloaded from the Magento Connect marketplace.
The Magento 2.0 code base is available at GitHub, for download. Magento has already made 30+ GitHub pushes to the Magento 2 code base since October 2014. Magneto 2.0 irons out most of the deficiencies or drawbacks in the previous Magento versions and is poised to make the platform more popular than ever before.
So, why don’t you explore the features of Magento 2.0? To know more about Suyati’s expertise in Magento, please send an email to services@suyati.com.

What is Drupal: What makes Drupal stand out among other CMS?

The need of the hour for Outsourcing Partners

The two sides of the Uttarakhand disaster