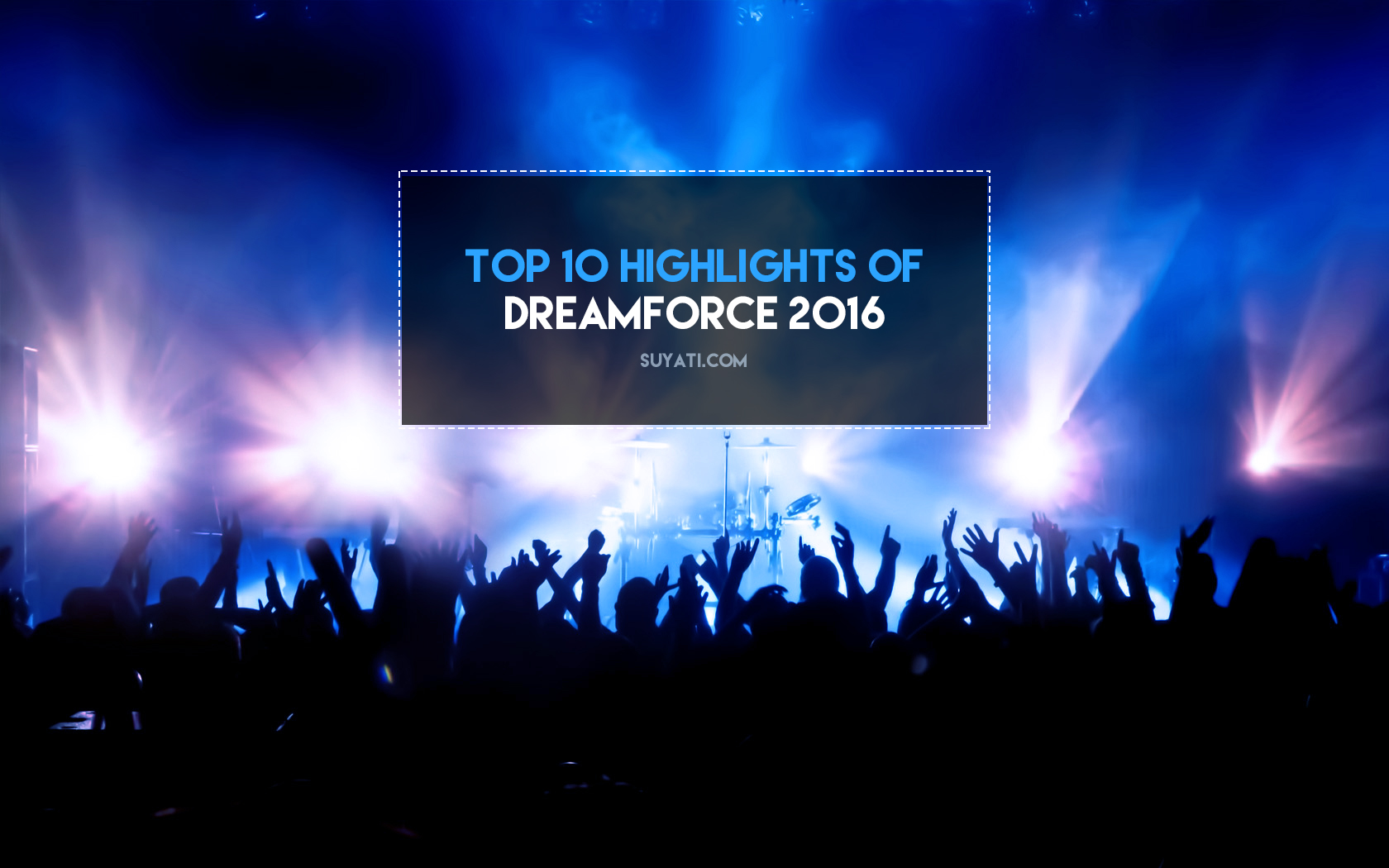 Dreamforce 2016 arrived in shiny armor under the headline act Dreamfest, designed with splendid events and even more alluring speakers (Think of Marc Benioff, Melinda Gates, Scott Kelly and Billie Jean King under one roof!). Starting with the amazing keynotes, the four-day event (organized from 4th to 7th October) was filled with workshops, on-hand training, discussions and lectures on technology of the past, present and future. Dreamforce 2016 saw more than 100 thousand people from over 80 countries flocking to San Francisco participating in one of the biggest tech-events around the world. Apart from the on-site training and breakout sessions, we also saw major limelight on the AI community including Astro and Einstein. Here are the top 10 highlights from Dreamforce 2016:
Gravity of Dreamforce: Mr. Einstein
Einstein is the every-person’s route to exploring artificial intelligence. The models of Einstein’s are personalized for every customer, governed by a self-learning mechanism where it develops through every bit of data and information exchanged with it. The technologies pulsating in Einstein’s brain include predictive analytics, advanced machine learning, natural language processing, smart data discovery and deep learning. In the business world, it can look into the data of enterprises, bringing forth insights and suggesting actionable laws and policies. Salesforce introduced Einstein to the world through Dreamforce 2016 as a global AI citizen. It was a crucial part of the opening keynote address and product keynote.
A DreamLand of Innovations:
The campground was filled with Salesforce customers, displaying their innovations. This included giants in the league of Farmers Insurance, T-Mobile and Aldo. Participants carried out first-hand encounter with these innovations.
The Fire of Dreamforce with Tony Robbins:
The multi-talented Tony Robbins brought out the charisma of his entrepreneurship, philanthropy and writing in the time he spent on the keynote stage. The crowd was on its feet and cheering him within few minutes of his entering the stage. After discussing ways to achieve one’s personal tech-goals, he walked through a cause which he has constantly stood by, removing hunger. Click here to know more about this session.
A Star-Filled Start with Benioff’s Keynote
Every year, Dreamforce waits for the show-starter Benioff to kick off the journey into their fest. This year, Benioff started with a personalized statement, welcoming everyone to the Family Reunion and walking through the core values of Salesforce. Parker Harris joined him later, discussing the life of CRM, emphasizing on the role of Artificial Intelligence in the future. This was followed with Salesforce customers, FitBit and Schneider Electric sharing the experience of their trip with Salesforce.
Celebrating-Diversity Keynote at Equality Summit
The marquee keynote event was the brightest moment of diversity in Dreamforce 2016. Tony Prophet, the new Chief Equality Officer at Salesforce began the event with a life-changing story of standing up for his LGBTQ son. Discussion on equality and unity in diversity was carried forward by the panel consisting of Kaiser Permanente CEO Bernard J. Tyson, Congress representative John Lewis and Tennis legend Billie Jean King.
Giving Back to the World: AIDS Fund
Dreamforce rocked with its global concern to raise $1 million for combating AIDS. Accompanied by (RED) Foundation, Salesforce took upon itself to pool in funds for a global organization first-time ever.
Trailheading the Camping Way!
Trailhead, the fun way to learn Salesforce flaunted a new face with one of the most vibrant themes, camping! Prizes awaited participants who won challenges and they also got to learn from other Salesforce MVPs and admins.
Kickstarting Your Dreams with DreamPitch
Salesforce extended its recognition as the spirited place for creative innovation by introducing a platform for start-ups to attract investment. The three highest-ranking startups built on Salesforce were presented to pioneering entrepreneurs and investors (Sharzad Rafati, Mark Cuban, will.i.am and Chris Sacca). Salesforce Ventures invested over $100k in the online product-testing ground based on chat, Claire and also offered it a space in the startup incubator.
Dreamfest at Cloud Palace
The sparkly U2 swept the attendees off their feet with their heartwarming numbers on the Dreamfest stage at Cloud Palace. Armed with the motive of creating awareness on AIDS, (RED) also voiced its 2020-mission to swipe off new cases of HIV. $10 million was also raised for the UCSF Benioff Children’s Hospitals.
Living the IT-Future with Robin Roberts and Melinda Gates
Co-anchor at ABC’s Good Morning America, Robin Roberts and the co-chair and trustee of Bill and Melinda Gates Foundation, Melinda Gates sparked a conversation on condition of girls and women across the world. The themes covered ranged from need to increase diversity without the technology world to ways of using AI to further equality in the world.
Suyati feels extremely proud to have presented at Dreamforce 2016. Read our blog to know more about what our Salesforce experts have presented at Dreamforce 2016.
We like to hear from you on Dreamforce. Please share your thoughts in the Comments section below. Do send us a mail to services@suyati.com and we would be happy to assist you with Salesforce solutions.

Future of MongoDB: What is in store for you?

How Technology made up the 2016 US Presidential Election

How many of you want to become an entrepreneur?

Does migrating to the Cloud ensure application agility?