Suyati Technologies > Blog > When is the right time to move to Entity Framework 7?

When is the right time to move to Entity Framework 7? 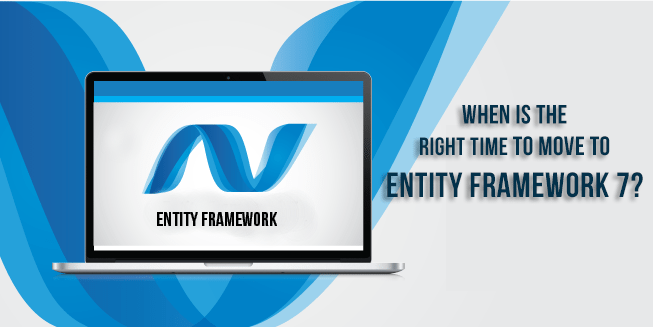 Entity Framework (EF) has come a long way since it was first launched in 2008. EF is Microsoft’s most sought after data access platform. In simple terms, EF is an Object-relational mapping (ORM) technology that allows the coders working with .NET to use relational databases using domain specific objects.
With the new beta launch (and subsequent full – version launch of EF version 7), we have seen a complete revamp of the old ORM.
In this article, we will see the key new features of EF 7, what has changed and what has not and whether you should move to EF 7.
New Features:
1.While the old EF was developed only to work with .NET platform, the new EF 7 enables you to work on many other platforms such as Mac, Linux, and Windows 10, that is, platforms that do not necessarily rely on .NET.

3. In EF 7, although the top level experience has not changed much, the core has been redesigned completely. This is because working with the current architecture is quite difficult and time consuming.

4. The old Entity Framework consumed a lot of memory, thus making it very slow. However, the revamped EF 7 addresses this issue. It is much faster and has less hunger for memory. This becomes extremely relevant today, as mobile devices have limited battery life and large cloud servers, where you have to pay for battery optimization.
5. Developers wanted to integrate various features into EF. Due to the rigid core structure and low flexible coding possibilities, the integration was impossible. Now, EF 7 has made it a reality. With the redesigned core, Microsoft has integrated more features to EF.
Key features that remain the same:
1. For all those applications that use the full version of .NET framework, there will be continued support given in EF 7. Example – Windows Presentation
2. The top level experience remains the same, in other words, there will be no significant change in the way you will be coding. Example – you would still have to use LINQ to code your queries against the DbSet properties.
Are you ready to move to EF 7?
For most of the developers, the framework is not going to change much. Once you start coding, the new version appears almost the same as the previous version, except for the advanced features. There are certain nuances that need to be learnt and mastered, but apart from that, we think it is a good idea to hop on to the new version.
While redesigning, an important goal to be kept in mind is to enable the developers to feel familiar with the new version, and also to transfer chunks of existing code to EF 7. Some of the features that are used rarely in previous framework will be eliminated during this transfer. An important point to note is that EF 6 is not getting dissolved, it will continue to exist and improve. A suggestion that this comprehensive article tries to provide is to definitely go ahead and take advantage of the forward movement, prudently though. Upgrading the major applications is a huge decision, and should not be taken in a lighter sense. Perhaps, you can break your application into smaller portions, and upgrade only a few portions to begin with.
As of now, EF 7 is still in its early stages of development, and all the features are not yet implemented. To understand what is implemented so far, this roadmap will be a useful guide.
Moving to a new framework is always a tough choice. It is like coming out of your comfort zone. Are there any apprehensions you have regarding this upgrade? Or other features that you know about EF 7? Leave a comment below.
To know more about Suyati’s expertise on Entity Framework 7, please drop a mail to services@suyati.com.

Why is Customer Experience Important? And How To Make It...

Knowledge Management with Microsoft for Cloud