Why you should use PhoneGap for cross-platform mobile app development 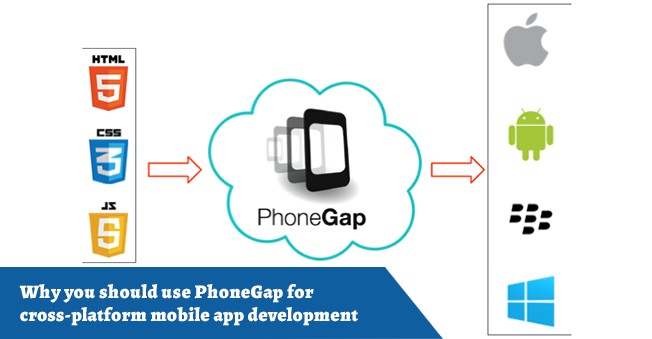 PhoneGap, also known as Apache Cordova, is a mobile development network that is both free and open source, and also allows you to create cross platform mobile apps easily. You get to use standard web technologies such as HTML5, Java and CSS3 to develop apps and then you can roll them onto the platform of your choice – be it iOS, Android or Windows. The increasing demand for Android, Windows and iOS now required developers to code multiple applications for different devices. But programming the same application for different devices can be a huge waste of time. That’s where PhoneGap steps in. Some key features:
Amazing User Interface
PhoneGap framework delivers web content using the similar web view that is present in native operating systems like iOS or Android. This platform allows solid coding user interface which allows effortless navigation, seamless scrolling and soothing graphics effects. The UI is a regular web view – it covers 100% of the width and height of the screen.

Easy to look homogenous across distinct platforms
At one point, application owners had their apps, however good they were, look different on different platforms. They may look different, or feel different to the end user. But with PhoneGap, this has changed drastically. You do not have to worry that your app is going to have seamless navigation only on iOS or on Android.
You can now ensure that your app looks and feels uniform, thus rendering an element of professionalism across the board.
Packaging & Distribution
Processing of PhoneGap app happens with the help of HTML, CSS and JavaScript, thus making it compatible with different application ecosystems.
For iOS operating system, PhoneGap apps are of the type IPA file, and for Android based operating system, the application is in APK file format.
These file types are same as that used by the native applications, making it possible to be distributed through the same platforms as native apps such as iTunes Store, Google Play Store or BlackBerry App world.
Benefits of PhoneGap for Business
If you’re a business owner, then you should consider using PhoneGap to develop your mobile applications. Yes, it definitely is important to develop mobile apps, it’s the need of the hour. However there is a big hurdle. The main hurdle is the ever changing and evolving mobile platforms. Today, there are quite a few mobile platforms present, each having a substantially big user base. So it becomes imperative to develop your mobile application for each of the varied platforms; which in turn means that you have to write your code in different languages as each platform has its own unique programming language. The advantage of using PhoneGap is that it allows you to essentially build the app once, then simply make minor adjustments to get it to work platforms in an easy manner.
Benefits of PhoneGap for Programmers
If you are a web programmer using the popular HTML5, CSS or JavaScript, then PhoneGap brings to you a world of opportunities. With PhoneGap, you can develop mobile applications with the popular programming languages you already know. Applications built using PhoneGap are hybrid in nature – meaning one part of the application is based on HTML/JavaScript and the other part is based on the native language for that platform.
PhoneGap can be a handy tool wherever speed or cross platform support is important. Apart from technical details, PhoneGap is also a project full of zest, supported by a great community which continues to push the technology forward with upgrades and tutorials.
Other Key Advantages.
Besides all these factors, there are also the following advantages:
• PhoneGap has a native plug-in model which makes it very flexible. That means, users are able to write their own code for different plug-ins.
• PhoneGap includes many application programming interfaces (APIs) that help developers access the native operating system functionality by using JavaScript.
• Easy to learn: PhoneGap uses HTML5, CSS3 and JavaScript, making it easier for developers since there is no need to learn any other specific or new language for coding mobile apps.
• Easy to Install: PhoneGap apps are easy to install just like other native apps.
• Effortless marketing of the created apps: The apps created using PhoneGap can be easily marketed and distributed in the app stores.
• Well packed with multiple libraries: PhoneGap comes packed with many libraries which makes development of apps easier since libraries help incorporate different functionalities into the apps effortlessly. This also saves valuable development time.
To summarize, developing apps by using PhoneGap app development platform not only saves lots of money, but also time for the developer and the entire development industry as a whole. This technology enables developers to make cross-platform and highly interactive applications which would work seamlessly on all platforms just like their native apps would.

Weed out duplicate data with Duplicate Management in Salesforce

Springboard Your Selling Prowess with Pardot

All you wanted to know about Amazon SNS