Suyati Technologies > Blog > Why your investment in the Azure Cloud platform is a good bet?

Why your investment in the Azure Cloud platform is a good bet? 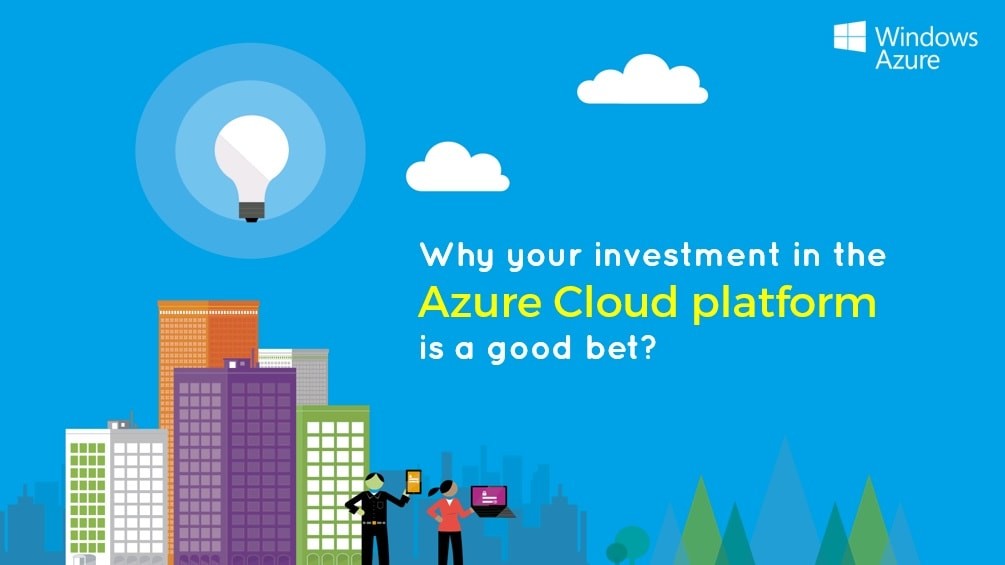 If you are looking to invest in a right cloud platform for your organization and weighing your options between Amazon Web Services (AWS) and Microsoft Azure, we will nudge you in the direction of Azure. The obvious question that would arise here is the validity of our suggestion considering the fact that AWS has been in this field for close to a decade and is a name to reckon with among the best cloud computing service providers. Yet, we are here to highlight some of the unique advantages that Azure delivers even though it is a fairly new contender in a market that has been hitherto dominated by AWS.
As more and more businesses are moving to the cloud, finding the right business management platform for an organization becomes an important decision. The decision could be based on many factors including the size and nature of the business. Therefore, a right choice for one need not be necessarily a right choice for the other. We will start by comparing the two contenders on some of their common as well as differentiating factors.

So, what is common between Azure and AWS?

According to a recent Gartner report, AWS is more than five times powerful than 14 of its closest competitors, including Azure, in terms of cloud computing. Although Azure made its foray only in 2010, it is gaining traction and has managed to build a large network and stand as the closest rival to AWS. We can broadly categorize the services provided by AWS into four main groups: Compute, Databases, Storage & Content Delivery, and Networking. AWS offers powerful analytics through Hadoop (Elastic MapReduce) and data streaming in real-time via Kinesis.

Azure’s services can similarly be classified into four broad categories: Compute service, Data service, Network service, and App service. Azure also supports a Hadoop framework via HDInsight and can stream data in real-time via Apache Storm. Both AWS and Azure provide the necessary tools that facilitate Internet of Things and help customers develop newer Apps or create a high-performance environment for computing.
The storage options are similar for both providers. In the case of AWS, one can choose among the Simple Storage Service (S3), Elastic Block Storage (EBS), Elastic File System (EFS), Import /Export large volume data transfer service, Glacier archive backup or Storage Gateway. These also integrate with the on-premise environments.
On the other hand, Microsoft’s storage options range from its core Azure Storage service, Azure Blob Block Storage to Table, Queue, and File storage. Additionally, one can avail the advantages of Site Recovery, Import/Export, and Azure Backup.

What differentiates the two, then?

Let us analyze some of the key differences between Azure and AWS.
Integrated services:
Gartner research director Hilgendorf opines that AWS’s biggest strength is its offering of a large network of best- in- market vendors and an equally large database in analytics and warehouse markets, thus giving its customers a fantastic spread to choose from so as to build their services. However, the onus of integrating the services and managing them lies with the customer. AWS also depends on third-party network tools to enable the hybrid cloud. By contrast, Azure offers integrated tools and solutions that allow a customer to build his/her infrastructure faster. In addition to this, Azure also manages the virtual infrastructure for its customer.
The Microsoft advantage:
If you have an organization that is well integrated with Microsoft products, then Azure should be your choice by default. Also, Azure is interoperable with Hyper-V making it desirable for those who run Microsoft’s Virtual Machines (VM) or rely heavily on Office 365 or Hyper-V platform. Azure, for such customers, will facilitate a smooth experience to create hybrid clouds.
Hybrid Cloud:
With respect to hybrid cloud strategy, AWS trails behind Azure. Many businesses like health care or finance prefer on-premise cloud for sensitive data while keeping the rest of the data on a public cloud. Such organizations opt for a hybrid cloud solution. Azure has been built on these lines, and hence will be a naturally preferred choice for such organizations. Building hybrid applications is easily possible using Azure by leveraging the resources within your data center itself.
Auto-scaling measures:
While Azure is slowly ramping up and gaining visibility, AWS’s auto-scaling features with tools like DynamoDB NoSQL database and Lambda gives it an enormous strength to scale up in huge proportions.
Learning curve:
With Azure, you are putting to use technology and resources that you already possess like Windows, Linux, VMs and tools like Visual Studio, GitHub, Hadoop, and Xcode. In this sense, you do not have to invest any extra time to learn the ropes and make use of the cloud in the fullest possible manner. AWS, on the other hand, has a steeper learning curve.
Other Services
Azure provides certain critical advantages like having a disaster recovery plan and guaranteeing an advance announcement (prior to 90 days) regarding any changes to its SLA (service level agreement).

While Azure is still taking baby steps to match up the giant rival AWS, its unique advantages do measure up enough to be considered over AWS, especially for businesses that already rely on Microsoft technologies.
Which cloud platform do you prefer- Azure or AWS? Leave your comment below.
To know more about Suyati’s Azure cloud platform expertise, write to us at services@suyati.com.

Transitioning teams to Agile – a journey, not a destination

Migrating to the cloud from a physical environment – Some...

ABCD—Anybody Can Dance. We did and we won!