Suyati Technologies > Blog > How Yammer-Office365 Integration will benefit Your Business

How Yammer-Office365 Integration will benefit Your Business 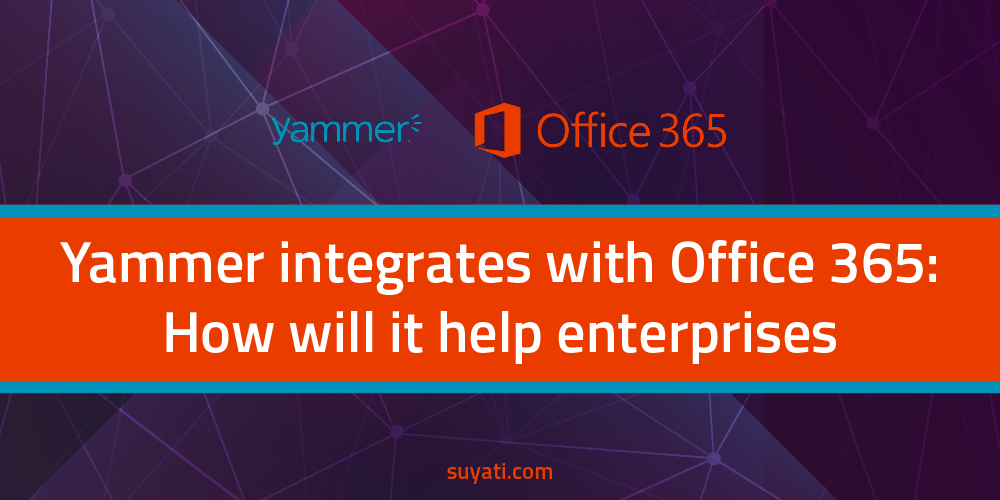 Microsoft’s annual Ignite conference traditionally sets the tone for the key developments in the coming year, including the launch of new products. The September 2016 version of the conference did not disappoint on this count, with a slew of new announcements. Towards the end of the list came the announcement of integrating the popular social tool Yammer with Office 365.
The stated aim of the integration is to improve collaboration. But will combining Yammer with Office365 really help business in any new way, or is it simply stirring up the pond to make some noise, more so considering Facebook for Work is due to release soon?
The corporate world is increasingly becoming collaborative and teamwork is on the rise. Empirical evidence suggests the average employee is now on double the number of teams they were on, five years ago. While collaborative groups have their own benefits, a traditional bane has been the “one size fits all” approach to resource allocation. Different groups prefer different tools, and getting something done often requires a distinct, unique tool anyway.
A big reason for the success of Office 365 is its flexibility in embracing diverse workstyles, and having a vast stockpile of tools, enabling teams to make a choice. For instance, groups that prefer the familiarity of structured email can use Outlook groups. Teams that want to meet and work together in real-time can have Skype for business. However, one tool that most groups are hooked up to is Yammer, the work-based social network from Microsoft. In fact, about 85% of Fortune 500 companies already use Yammer.
The Possibilities
Yammer, true to its social media nature, connects teams across the organization, enabling free and open communication. It serves as a convenient medium to share ideas, discuss issues, and accelerate the decision-making process.
Integration of Yammer inside Office365 enables team members to turn ideas they get or fix from their social conversations into action, instantly and seamlessly. Side by side, Yammer groups get access to a slew of new and powerful collaborative resources, which make collaboration easier and dynamic than before.
Post integration, Yammer users and user groups get access to SharePoint’s content management capabilities, Office’s document creation and editing capabilities, OneNote notebook, Planner, and Outlook group calendar, in addition to Yammer’s collaboration capabilities, all from the same place. It now becomes much more easy, for instance, to access SharePoint sites and document repositories from Yammer, or share a OneNote notebook in the group.

The Technical Nitty-Gritty
A lot of back-end work preceded the September 2016 merger. Microsoft engineers worked relentlessly in the background to forge a deep back end integration, to meet security compliance and trust commitments.
The front-end Yammer-Office 365 integration now enables seamless sync. Yammer is now connected to Office365 Groups service, making available all group properties that include name, description, profile picture, membership and public/private setting in both Yammer and Azure AD (the repository for Office 365 groups). The changes made by admins in the group member profile including adding and deleting members reflect across Office 365 and permissions are updated accordingly. Likewise, admins can also manage groups in the Office 365 admin center and apply PowerShell scripts to simplify bulk updates.
Office 365 Groups now provide conversations in either Yammer or Outlook. Office 365 Groups created in Yammer will have conversations in Yammer, while Office 365 Groups created elsewhere in the suite will have conversations in Outlook. This will prevent fragmented conversations.
The integration also involves some of the existing Yammer functionalities becoming redundant, and such functions would gradually be discontinued. The most significant among such redundant functionalities is the Yammer Notes. OneNote notebooks offer a better notebook experience, complete with rich text formatting, and also provides the capability to organize notes by sections and pages.
The Future Works
There are more changes in the offing.
Next in the offing is Yammer group usage reports. Admins will gain the ability to drill down into group level analytics, and export or share such usage data using Power BI content, to others within the organization.
As of now, files uploaded to Yammer are stored in Azure, with all permissions and capabilities intact. Microsoft plans to retain this status quo as of now, but Yammer users can now also upload and store files in their group’s SharePoint document library. In the long run, all files stored in Yammer will be migrated to SharePoint.
Full integration between Yammer and Office 365 Groups is the ultimate goal, though it will be achieved only in stages. Yammer has already been turned on for all eligible Office 365 customers. The standalone Yammer Enterprise offering will be phased out by January 2017. All things considered, reports of the death of Yammer are grossly exaggerated. Far from going away, Yammer is growing, finally realizing its destiny as the social network across the Office 365 suite.
Leave your comments on the Comments box given below. To learn more about Suyati’s Microsoft expertise, please send a mail to services@suyati.com.
Related Posts:

How Artificial Intelligence is Transforming Healthcare

Digital Transformation in Manufacturing: How Predictive Maintenance Could Be a...