Internet of Things has turned our world into a mesh of smart sensor connected network. From home appliances to giant windmills, IoT binds every imaginable device to a network for remote access and smart functioning. Farms, crops, and grains are no exception to it.

‘Smart Farming’ and ‘Connected Agriculture’ have already become buzzwords for agriculturists who have always believed technology has nothing to do with farming and agriculture.

The Growing Need for Digitization of Agriculture

With global population tipped to cross 9.6 billion by 2050, there will be heavy pressure on existing agricultural land to ramp up production. The global production will have to increase by at least 70% from the production levels of 2006 to feed the entire world’s population.

While arable land cannot be grown any further, the only way out is to increase the productivity of available farming land mass. That is where IoT comes into play.

Internet of Things with its tiny sensors that can attach to any surface to monitor humidity/moisture, pressure, brightness, presence/proximity, motion, chemical or gas flow can turnaround fortunes for the farming community. IoT can arm farmers and agriculturists with accurate data about crop health, soil fertility, weather forecast and many other data models. These data models will empower farmers at devising smart cropping techniques and farming methods that will maximize crop yield within the same time span, using the same available cultivable land.

Here are some ways how IoT will find its way into farmlands in 2018 and beyond.

Use of drones for crop data capture

Farming drones have already started swarming across fields to do a variety of tasks like spraying pesticides, capturing geo-location based farm photos and giving precise input of water and fertilizers.

Global Market Insights estimates the market size for these farming drones to exceed $1 billion by 2024.

Some popular farming drones that are on sale right now include:

These farming drones, depending on their make, can be controlled by a person or can chart out their own flight path using geo-positioning of on-ground IoT sensors. The data so collected is sent back to servers or systems where the user can analyze it for decision-making.

The sheer size of farmlands makes it difficult to monitor the soil data on a granular basis. Farmers have to often rely on sampling methods, which give an estimate of the fertility, moisture content and yield of the total arable land. But, the sampling has often proved to be wrong, given the inconsistency of soil levels and chemical composition that varies from location to location.

IoT can help take away the guesswork involved in farming. Sensors can be harvested at uniform distances across the length and breadth of the farmland to collect accurate soil data. Farmers can view the soil data in backend dashboards or through custom-built mobile applications for farm monitoring.

Smart Farming solutions like i-dripper are already paving new inroads into this modern sensor-based farming technology. I-dripper has named its moisture sending sensor technology, Roottens. It will give farmers a graphical outlay of their entire farming operations, complete with yield rate and crop health, and every other imaginable data that a farmer might want to know about.

The Internet of Things ecosystem is made up of sensors that can detect and measure key weather conditions like temperature, humidity, rainfall, specific chemicals and more, accurately. There are umpteen number of customizable sensors available in the market that can be configured to suit farming requirements.

These sensors help farmers monitor their crops and the real-time weather surrounding them from remote locations. The need to be physically present and tend to the weather needs for ideal crop yield is eliminated. Eventually, it multiplies the productivity with which farmers can create agricultural output without exerting additional effort.

The image below shows how these sensors will exchange information to IoT hubs, which again will transmit data over the cloud to user systems: 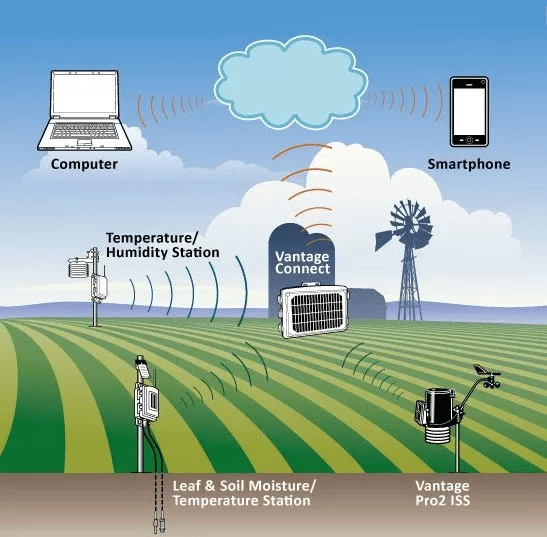 IoT in agriculture can help scale up the food produce across the globe. Brazil, Australia, New Zealand and several other countries have already created national agendas to modernize their farming methods with the help of IoT. The United States is leading the pack of IoT enabled farming with an approximate 16000 lbs of cereal produce per hectare. The global average tips at 8500 lbs.

Read: 5 key industries where IoT will cause major disruptions in 2020

Large-scale pesticide spraying activities can now be done with fractional costs thanks to geo-location enabled farming drones. Drones will also aid in monitoring crop growth and health on a timely basis without requiring farmers to traverse the farmlands physically.

This is 2017. There is still a long way to go before IoT will become affordable and accessible for all farmers including those with fragmented land holdings. We can rightfully say that with the current pace, IoT will gain rapid momentum in 2018 and years to come.

How to plan for a Salesforce server switch

All you need to know about Azure Confidential Computing