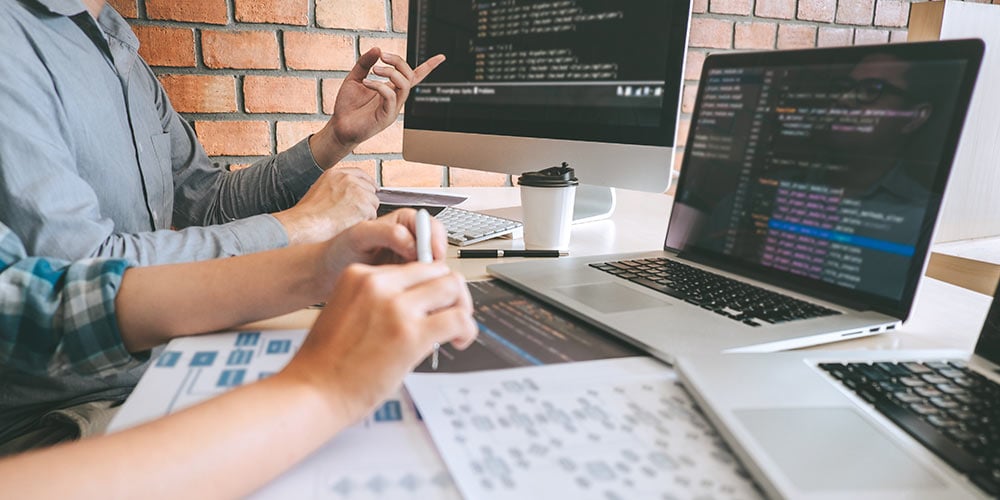 Salesforce allows lay users, without programming knowledge, to build native apps and manage the platform. The web interface and declarative application framework enable building applications from scratch or maintain existing applications without writing code. But such out-of-the-box features get only the basic things done. It is rarely enough for high-level business applications. Salesforce developers write code for advanced business functionality and for deep customization.

A key USP of Salesforce is the flexibility in coding. Most Salesforce developers use APEX. But developers could also use APIs and write code is any imaginable language, including C#, Java, Node.js and more. Developers may use the Visualforce framework to build custom user interfaces and host it natively on the Lightning platform.​ Like everywhere else, successful Salesforce developers have mastery of software design and good logical skills. They also ensure they write clean code.

Any code written logically and passes QA/UA tests can get the job done. But developers may fall into the trap of dirty code or bad code. Such dirty code maybe because of sloppiness, but is most often due to a crazy deadline. Making the code clean may take some extra effort and time. But the marginal delay or extra investment is worth it and pays for itself within a short while.

Clean code is pretty to look at. But the benefits go much beyond the “feel good” factor. Here is why clean code matters in Salesforce.

Likewise, the development environment is never static. Employees leave, often taking away with them the knowledge and nuances of the project. At times, team members who developed the code may be busy with other projects. Even developers who first wrote the code may forget about the things they coded six months later.

Clean code makes it easy to change the software fast, by co-opting the following characteristics.

Bad code accumulates. Often, business exigencies force developers to conjure up workarounds. Ideally, developers refactor such workarounds later, to fit with the code standards. But often, developers may forget about the workarounds, and the dirty code gets entrenched in the code base.

Consider a developer who changes a trigger in the Org. He continues to make such changes whenever the need arises. Such changes add up, and the trigger gets longer and cluttered. It soon reaches a point where the developer cannot deliver additional requests at the same pace as earlier. It becomes difficult to predict how the code will react to adding new lines. The system becomes fragile and breaks easily.

Developers overcome such issues by enforcing coding standards and adopting coding best practices. The following clean code practices are integral to such efforts.

Bad code accumulates over time. The tech industry has a turnover rate is 13.2%, which is higher compared to most other industries. The odds of the developer who created the program being available to maintain or correct the code is low.

A new developer who has to update or change existing code has to study the code first. Bad code increases the time to make sense of the code. The time taken to make sense of the code, before fixing it, makes error-handling a disaster. Clean coding standards make sure the code is easily readable and understandable by any developer. The following key standards contribute to easy maintenance:

One of the biggest fallacies is that clean code matters only to programmers, and that only the functionality matter to customers. As long the functionality works fine, small bugs are insignificant. The reality is that good coding standards matter most to customers. Programmers and developers eventually master dirty code, even if they have to spend considerable time on it. But a customer who spends money to buy a product embedded with dirty code gets struck with it. Dirty code could make a website slow or unwieldy. Delays in updating a payment system or order tracking system harm the customer. Clean code improves the customer experience in the following ways:

Clean code results in a lower total cost of ownership, and ultimately, lower prices for customers.

Dirty code may cause project failures and malfunctions. Convoluted code force the DevOps team to review each line of code post any update. This wrecks team productivity, project efficiency and retards ROI. Technical debt, or time to cleanup the code, racks up hundreds of hours of tedious work. The opportunity cost for technical debt can make all the difference between profit and loss.

Clean code increases the competitiveness of the business. Contrary to the common impression, taking extra time to ensure clean code does not slow down the project.

READ : Best Practices while choosing SELA for your business

Any delay in closing a deal or engaging with the customer results in a smarter competition stepping in and taking away the business. Many developers rush the code to the market, due to business pressures. Subcontractors, working on fixed time frames rush through the changes. They do not refractor it, creating further problems. They disregard sloppiness in the code, as long as the functionality works fine. Such issues cause dirty code to snowball. But such a short-term approach does more harm than good. Any loss owing to a marginal upfront delay is well worth it.

A spin-off benefit of clean code is job satisfaction and lower employee turnover. With clean code, developers do not come under extra stress. This reduces the turnover rate and increases the competitiveness of the business. Conversely, when developers have to spend time to understand the code, it adds to their stress levels.

This increases the turnover rate, creating a downward spiral, and an overall air of negativity.

When developers add or change complex code, they may inadvertently leave a bug open. Today’s sophisticated cyber rovers use advanced Artificial Intelligence-based techniques to seek out vulnerabilities and take advantage of even the smallest of loopholes. The following clean code practices pre-empt such vulnerabilities.

Clear and simple: Clean code is direct. It reads like well-written prose.

It is very difficult for bugs to hide inside such clean code. With dirty code, vulnerabilities remain hidden, and is expensive to fix.

Unit tests: It is easy to run unit tests with clean code. Weak spots are where distortions and code breaks exist. Cover the code with unit tests to detect weak spots.

Reviews: As the adage goes, “two heads are better than one.” Do regular peer code reviews, analyse the code from different angles, and hold each developer accountable. Each member of the team analyze the code done by others. They play the Devil’s advocate to find out logical flaws, structural mistakes, or other errors in the code.

Adopt an Iterative approach: Writing and revising the code iteratively makes it more secure. Smart developers come back to the source code after writing code for functionality, and look for the scope to improve the code.

Refactor the code: Getting the code to work might result in long messy code. Refactoring after major changes cleans the code and improve readability and security. Invest time to go through every line of code, step by step, and look out for bugs or loose ends. But resist the temptation to break existing code and rewrite everything from scratch. Refactor in small chunks to avoid messing up one part while trying to fix another part.

Clean code also makes a powerful statement. It communicates the enterprise’s attention to detail. Clean code is coding smart instead of coding more. Good code is an art. Writing clean code requires disciplined use of resources, combined with an agile code sense. Contrary to the perception, clean code does not slow down the organization, but makes it better and more amenable to the customer. Clean code is the foundation for a reliable cost-effective product, which is extensible or upgradeable.

The UiPath 21.4 Release: What’s new and what has changed

7 Reasons for Businesses to use PHP