A look at what was in store for developers this year
Google I/o 2015  was the 8th annual developer conference held by Google, which kicked off way back in May 2008. For those who are wondering what IO stands for, yes, you guessed it right, it is input/output. But it also stands for “Innovation in the Open”.  Each year, Google comes up with new innovations and concentrates on optimizing the already stable version of their technologies. Unlike last year’s IO, this time, they have come up with awesome stuff that will blow your mind. This year, Google IO was conducted in the Moscone Center in San Francisco, California. The ambience at Moscone Center was so divinely described by the live bloggers out there that it made me jealous of all those guys who attended the event. And guess what, the speed of the Ethernet provided by Google for those who attended the event was 91.2Mbps—can you imagine that! This time, Google introduced some fascinating products and intriguing concepts. Here are the main highlights of the event:
The Developer version of Android M
The look and feel of Android M is same as its predecessor Lollipop, only with more power optimization, new APIs and services, and a lot of changes in how your app interacts. The company has focused on improving the core experience of Android and has made some changes to the fundamentals of the platform, apart from fixing several bugs. The developer version is available for nexus 5, 6 and 9, but the rest of us will have to wait for it to come out in the market.
Let us see what’s new in Android M:

The newest addition to android platform is the revamped app permissions. It completely changes the existing permission system by breaking down the user permissions into specific categories and making apps ask the user for permission only at the time when the feature is required. With this, the app will start asking for permissions when running it and the user can decide whether to allow access or not according to the user’s requirement. You can also go into the settings screen to view what permissions are being used by the specific app and revoke or allow them. 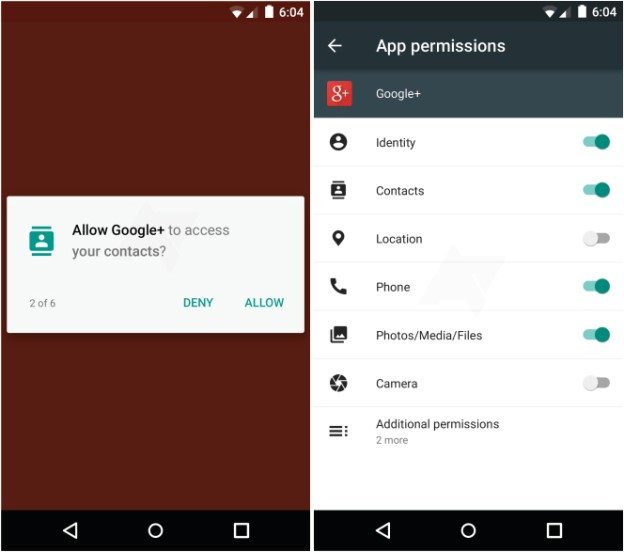 In Android M, Google has concentrated on standardizing the board of fingerprint and exposing standard API for the developers. You can use fingerprint to authorize android pay transaction, to unlock devices and make play store purchases, and any app developer can make you use of the open APIs to integrate fingerprint authorization in their respective application.

Google introduced a new feature called “Doze” for managing and controlling the amount of discharge when the phone is not being used. Here it uses significant motion detection to check whether the device is being attended for an extended period of time. In that case it exponentially pushes back the background activity to go into a deeper sleep. By using this mechanism the stand power of the device has been increased twice as that of its earlier versions. Google is also introducing “USB Type-C” charging, which has increased the speed of charging the device to anytime between three to five times faster. Another good thing about USB Type-C is that it is flipable, which means no more having to find the right direction to put in the USB!

Google announced Chrome Custom Tabs, which can be used in our apps as an in-app browser and makes loading pages faster by preloading certain elements. This will let you include web views within a particular app, without the need to switch to the Chrome browser on your phone. And also the developer can customize the chrome tab according to their apps theme. There is an auto-verify feature, which helps the developer link to other apps easily. For example, whenever you click the link to a tweet in Twitter or a post in Facebook, it automatically opens the Twitter or Facebook app respectively.

Google Now is going to be incorporated throughout the device through Now on Tap. Google Now is getting smarter with this new feature. It is now intelligent enough to know where you are in the UI and uses its improved natural understanding based on contexts such as your location, calendar, inbox, recent searches, and other “ambient” data, to figure out what exactly you need. You can access Now on Tap by holding down home button and it brings up Now card with relevant information using contextual understanding.

This feature will let you make your payments using near-field communication (NFC) and host card emulation techniques for tap-to-pay services. You just need to unlock your phone, keep it near an NFC terminal and your payment is done, without opening any app. This is not a new feature, but Google has been trying to make mobile payment work for years like those introduced by Apple. In Android M, with the new fingerprint integration Android pay is much easier and desirable. The online payments can be done easily just with a press of your finger. For real-time payment, the NFC hardware is what stands between the store and your credit card. None of the vendors will ever see the details of your credit card as Pay creates a “virtual card” similar to Apple secure tokens and keeps them private. Android Pay can be used on any registers that support NFC and also can buy goods from more than 1000 apps already including Etsy, Uber, GrubHub and more.
The new Google Photo App
One of the best unveiling was the new Photo app. Google took out the features from Google+, Photos similar to Apples’s IOS Photos app, which allows you to sort photos based on when you took them, by simply pinching and zooming your screen. A home to all your memories—big and small, something everyone wished they had and Google brings it to you through Google photo app. Google automatically categorizes your photos with people, places and things that matter most in your life, which you would take forever to do by yourself. And the most interesting feature is the searchbox where you can type in the thing, place or event related to the photo you want to search, and instantly Google will pick up the photo for you. You can also instantly create movies, collages, animations, story and albums with the photos. Google automatically gives you suggestions for these features using your related photos and you can edit, save, preview or throw-away those suggestions. They have done an amazing job behind the scene to bring up such an incredible app. That is not all; now onwards with Google photos you can backup and store UNLIMITED high quality photos and videos for FREE, yeah guys totally FREE!!!!! What are you waiting for, the app is already available in the play store and also available in iOS and web. 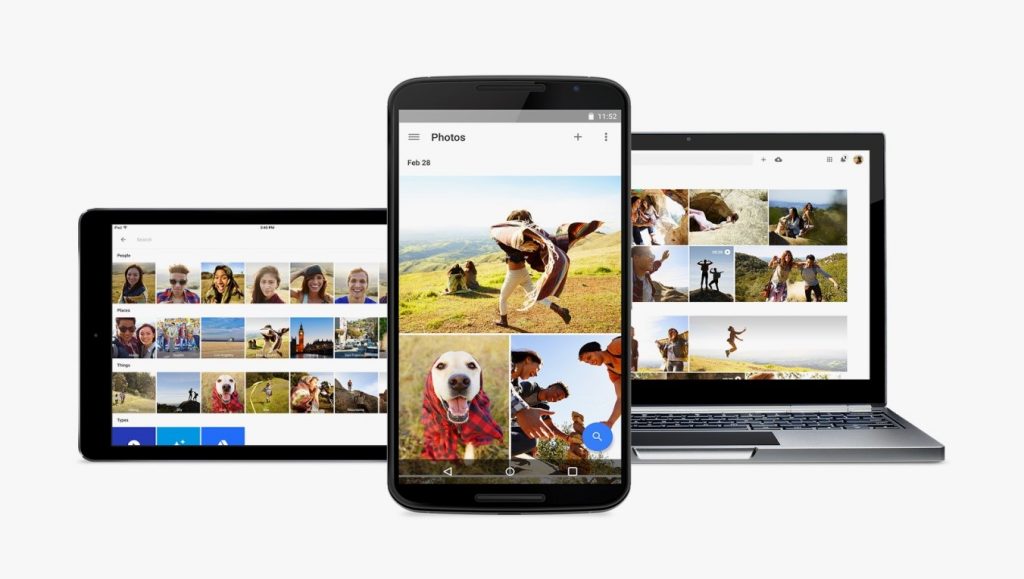 Project Brillo – Internet of Things
Now with project Brillo, Google wants to be everywhere in your day-to-day life. Brillo is an operating system derived from android to connect things from door locks to washing machines with each other and with the web. For this they have taken android and polished it down to the lower layers of android- the kernel, hardware abstraction layer, the real core essentials so that it can run on devices with minimal system requirement. And as it is derived from android, it gets all operating system support like Wi-Fi, low energy built Bluetooth connectivity, etc. In addition, device manufacturers can manage from a centralized management console, they can provision this device, update and so on. Google also introduced Weave (link), which is a communication layer, through which the Internet of things can communicate with each other, to the cloud and as well as to your mobile phone. It’s built into Android and was developed in partnership with the folks at Nest.
Project Loon- Internet Everywhere
Google wants to bring internet availability to the darkest corners of the Earth. Google has brought in Project Loon in which Google plans to bring in hundreds and thousands of high-pressure balloons to circle the Earth and give internet to billions of people on Earth. You might be wondering how the heck Google will control these balloons in high altitudes and in between large wind currents. What Google does is that it lets the balloon fly naturally and move it up and down to catch the winds in the direction Google wants the balloons to travel in. The balloons will be floating in the stratosphere much higher than any plane could travel and in stratosphere the wind goes in different direction at different altitudes. To provide continuous internet thousands of balloons are made to fly in a complex choreography and are steered and programmed over an automated fashion such that another balloon comes in  just when another leaves. Each balloon can provide connectivity to a ground area about 40km in diameter using LTE. For this Google partners with telecommunication companies to share cellular spectrum, so that people will be able to access Internet everywhere, directly from their phones and other LTE-enabled devices. Google has already partnered with Vodafone to try out this project in Christchurch, New Zealand.
These were the main highlights of this year’s Google IO. Some interesting concept projects are as follows:

Other than the introduction of Google photo app, this year’s Google IO was least exciting for the users but it was definitely more exciting for the developers. I can’t wait for the next IO meet to happen and see how much more they are going to pull out of their magic hat!
About the author:

Telvin Philips Mathew
Telvin is an Android Software Developer, who has been working in Suyati Technologies for close to a year. He is a tech freak, and his curiosity and passion towards technology drive him to be a developer. Telvin is in love with traveling; in fact, his bucket list is loaded with travel itineraries alone! He believes that the world is a book and those who do not travel read only one page.

Microsoft announces its first African Data Centers ahead of Google...