The treasure hunt at Suyati – adventure, fun, strategy and innovation! 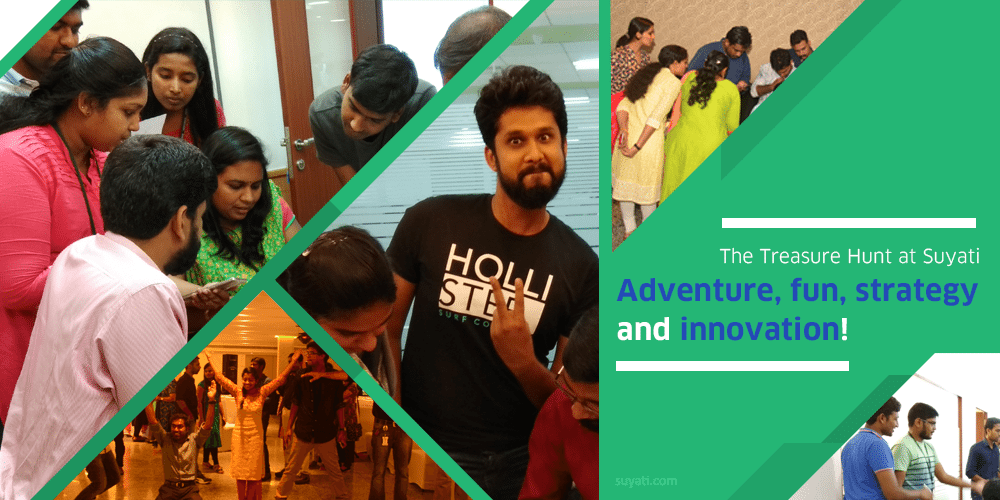 Suyati’s annual day was announced, and as members of the organizing committee, we had to come up with a new entertainer – something that Suyati has never seen before. A treasure hunt! Involving the entire team at Suyati!

The treasure hunt (TH) team was headed by our enthusiastic sales manager, Abhishek. He gathered a team comprising of fun-loving(!) members of the organization (basically people who enjoy seeing others squirm and cry and groan!) – Athena, Muktha , Roshni, Roshna, Sharafuddin, Neetha, Merin, Reny, Antony, and Unni.

The games were based on back-to-school theme, with a real school board examination with the craziest guidelines one could think of – allowing students to work collectively (AKA cheat!), supporting the real rights offered in a democracy, instead of stopping them for checking with the smarter ones for answers, and challenging each and every one to outdo the others. The organization was split into 9 teams. The team captain had to choose a team member who had to collect the right answers from the team and write the examination from a closed room. He had access to a mobile phone and calculator in the room, but could not meet any team member in person. This meant all answers had to come via his cell phone!

When we sent out these guidelines on the day before the event, we were amused by the way the teams called meetings to strategize! Some of them were worried about the make and model of the calculator that they could get ready for the next day, others were thinking about ways to influence the members of the organizing committee to get an early peek at the question paper. Free rides back home and food coupons etc. were just few of the offers that the organizing committee had to turn down in order to put up a fair event! The fun part was that all the answers to the questions where already present in their computers, either on the Suyati website or in the email inboxes in the form of CEO updates.

The fun started when the question papers were shared with the teams. Then the entire company (across all three facilities) erupted in doubts, screams, running, barging into the CEO’s room, shouting and cheating. Active participation of the team members was the only thing we wanted out of this competition and we were overwhelmed by the response. With questions ranging from the day the Suyati website was launched to the full name of the HR director, there was an assorted bunch of questions which set everyone thinking during the entire span of the examination and left them running around for answers. Thanks to the brains behind the questions!

The results were announced the next day with an option for teams to submit their papers for revaluation. No! We didn’t charge them a fee for revaluation but just asked them to get the team members a chicken biriyani. To our disappointment, none took the bait! Well, that was the end of round 1 of the competition!

Now came the practical session which is usually a part of every board exam! There were 2 different sets of exams in this one. One was for the developers – what they could do best: coding! For the non-geeks, we had devised a scavenger hunt. The game was into round two and it meant one thing very clearly – stricter rules!

Each team had to nominate a coder. The teams responded positively and were pretty confident about their nominations too. But what awaited the coders was something different. We brought in a sudden twist to the game – the coders who were locked inside a room with the task assigned were not going to do any sort of coding. They had to instead decode a set of programs. The coder who was in the room didn’t have access to a computer or laptop but only a phone using which he had to communicate the required steps to a team member outside the room. Well, this was an interesting twist and made the game tougher. We could witness the true Suyatian spirit when this part of the game was rolled out. Some of the teams were so desperate towards the close of the game that they just shared their answers with fellow-teams in search of the right answers.

Simultaneously, the non-geeks were actively involved in the scavenger hunt were they were to execute a set of tasks including dubsmashes, dance competitions, push-ups, Bollywood poster creation – it was pure mayhem.  Team coordination and creativity were at its best during these tasks, and I felt proud to be a Suyatian once again!

Round 3: The grand finale

Now for the grand finale on the day of our annual day celebrations.

A total of five teams made it to the final round. The venue was Le Meridien Hotel. The first task for the event was to solve a puzzle of a world map. The next task was to decipher a code and even though the answer was visible  before them, some of the teams failed to figure out the right answer. The answer to the puzzle was “Abhi”. In fact, Rufza directly asked Abhi what the answer to the puzzle was and even when he gave her the right answer, she did not believe him!

The next task was to put out a human figure display of “We love Suyati” and this was pretty easy for most of the teams. It was indeed a treat to the eyes to watch the display from afar. This was followed by few more tasks which again included coding and decoding etc. One of the interesting developments during this phase of the game was when the teams that were disqualified earlier, split into groups and joined the participants and this made the whole event more joyous.

The final part of the final event was a crossword puzzle which was a pretty tough nut to crack and only one team could come close to the answer. Jaseem’s team won the competition, literally with seconds to go! With that, we came to the end of a stunning event that would be remembered by the entire organization!

How Artificial Intelligence is becoming the core of the future