Suyati Technologies > Blog > PowerApps in MS Dynamics: How it can be a Game Changer for Businesses

PowerApps in MS Dynamics: How it can be a Game Changer for Businesses 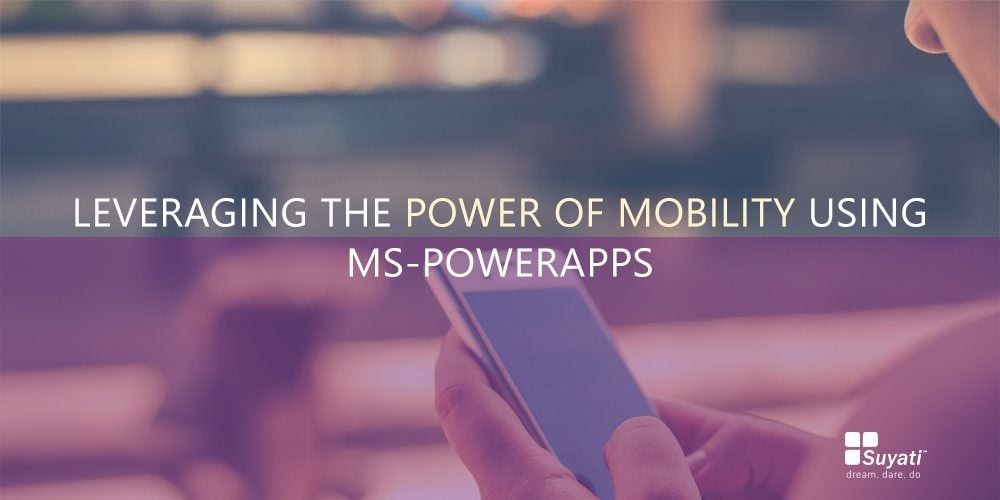 PowerApps, Microsoft’s new tool, accelerates and simplifies the process of app creation. It allows ordinary enterprise users to create an app out of the data they have, to work across the web and mobile seamlessly, and collaborate effectively, without being restrained by enterprise red-tape.

While there is no shortage of services promising to make app development easy for end-users, and empowering anyone to write a basic mobile app without having to code, PowerApps comes with certain distinct and unique advantages and offers the potential of becoming a game-changer for enterprises.

Read: What are the Challenges in developing frameworks for Smart Mobile Apps?

Leveraging the Power of Microsoft

Foremost among the advantages enterprises leverage by using PowerApps for developing apps is the Microsoft brand recognition. PowerApps, being from the Microsoft staple, integrates and gels in seamlessly with other Microsoft solutions and resources.

Usually, enterprises are saddled with two major hassles when developing an app—the obvious hassle of coding the app to perfection; and the even bigger yet underestimated challenge of integrating the new app to existing enterprise systems and data. PowerApps offers seamless out-of-the-box connectivity to MS Dynamics CRM, and also to other Microsoft services such as Office 365 and Azure. It also offers easy-to-deploy connectors to third-party applications, such as Salesforce, Dropbox, OneDrive, Slack, Twitter, and other popular applications. Seamless integration is possible even with on-premise database systems such as SharePoint, Oracle, SQL Server, SAP, and others.

For all the popularity of mobility and mobile devices upstaging desktops as the device of choice for the majority to access the Internet, much of corporate work is still tied to desktops.

Even as most enterprises readily adopt SaaS solutions such as MS Dynamics and Workday for their CRM and ERP requirements, most business app scenarios are still on premises, dependent on PC connected to the corporate network. Even when enterprises have rolled out apps, such apps invariably suffer from major limitations, such as not being optimized properly for the mobile, not integrated seamlessly with other enterprise resources, or available freely across all devices. From a macro level perspective, business apps lag behind consumer app in richness and ubiquity.

A big reason for such a state of affairs is many enterprises still using the legacy Windows resources such as MS-Word, MS-Excel, MS-Outlook, and the like, or their open-source replicas. Change, for all the benefits and potential it brings about, is difficult, and the resultant chaos makes many enterprises wary.

Adopting PowerApps will herald enterprises to a shift to mobility in a big way. PowerApps marks a distinct shift in Microsoft’s approach, in that it heralds a mobile-first approach. Catering to the trend of more and more users accessing the internet through mobile devices compared to traditional computing devices, PowerApps is designed to work primarily on mobile devices. Turning the conventional approach upside-down, the use of the app in desktops and laptops are now an afterthought. PowerApps works seamlessly with all current mobile OS, including Android, iOS, and Windows.

The natural integration of PowerApps with incumbent systems such as MS-Dynamics will enable many enterprises to make a shift with minimal disruption.

The second major reason for the rather lackluster mobility adoption at the enterprise level is the sheer practical impossibility for IT teams to roll out apps for all possible requirements and eventualities, and there being a severe shortage of external developers to go around writing apps. PowerApps solves this issue by empowering end-users to develop their own apps. Research major Gartner predicts the demand for mobile development services to increase in 2017, leading to premium for skilled developers and a run for resources.

In such a scenario, PowerApps takes the friction out of the app development process. It runs contrary to the traditional approach of skilled developers writing reams of code, backed up with heavy technical resources. Ordinary enterprise users, be it marketers, HR executives, or accountants, may roll out apps in the PowerApps interface, entirely through a drag and drop interface and a WYSIWYG template, without having to use even a single line of code. The data related to the app is published in the cloud, making it accessible to other users with the required credentials, and who downloads the app. The highly graphical interface and a set of templates for building basic apps with just a few clicks are the icing on the cake.

Getting started with PowerApps is easy. Users need to simply install the PowerApps Studio from the Microsoft Store, and can fire up the application with just a few clicks. The PowerApps Studio reads the specified data source and determines the best template to use based on the data format. Users have the option to select another template manually. They also have the option to start with a blank slate, and create their own mobile app. Refining the new mobile app with the required customization is equally simple, and in most cases self-explanatory. Creating a fairly good app takes just an hour or so in most cases, and from thereon, the user could use the smartphone instead of the PC to update the app with daily vital statistics.

Users may publish and share their newly created apps within the enterprise, through a central PowerApps app, or by sending a link to the selected people or groups.

Power Apps delivers the capability to roll out highly professional, dynamic and versatile apps, on-par with professionally built apps. The simple, code-free nature of PowerApps, apart from empowering end-users to develop their own apps, saves considerable effort, and by extension, money for the enterprise. It also delivers apps on-the-fly, so crucial in today’s fast-paced business environment.

It gets better, with the ability to integrate data seamlessly, and execute any possible use-case scenario without a hitch. PowerApps solves a major technical problem associated with apps. The data generated by an enterprise invariably proliferate to spread across not just the various on-premises systems but also extend beyond the firewall, mostly to SaaS clouds. With data stored in many systems, and much of it trapped in inaccessible silos such as unconnected hard disks, it is difficult to connect to and consume related data from within an app.

PowerApps offers easy connection to data residing at different places, and enables almost all possible use-case scenarios. For example, a sales executive may use PowerApps to connect to the data stored by the customer service executive in Dynamics 365, and access it when meeting a customer on the field. An accountant could easily base the app on data stored in an Excel file saved in Dropbox, and pass into the top managers and auditors for their review. The HR team could write a custom app to track its recruiting efforts, and a sales team could wire up data from Salesforce and other tools to track its progress. Users can even synchronize their cloud data with their mobile and desktop data, seamlessly.

Power Apps also enables the enterprise to make a perfect trade-off between the requirements for flexibility and the need to retain enterprise-level control. The IT team can still manage users and ensure data is accessed only according to the company’s policies. Once a user is enabled by IT to use PowerApps, they will be able to access data from cloud-based as well as on-premise data sources into the apps they create.

Using PowerApps, the cost of developing apps reduces to about 1/10th of the present mainstream development cost.  Enterprises also gain from accelerated time-to-market, without the hassles of App Store delays. Empowering end users to create their own apps increases productivity manifold. However, such advantages come with a caveat. The success of the “democratization” of the app development process requires a cultural shift in many enterprises. The success of PowerApps, and also the other collaborative tools offered by Microsoft, such as Office365, depends on the enterprise culture encouraging innovation, collaboration and communication at many levels. This is, however, easier said than done.  The top management needs to not just give the go-ahead to use tools such as PowerApps, but also realize that restricting the creative potential of employees in an attempt to exert control does more harm than good.

How Microsoft Dynamics CRM transforms the way you sell

How to evaluate a CRM for your business with the right questions?