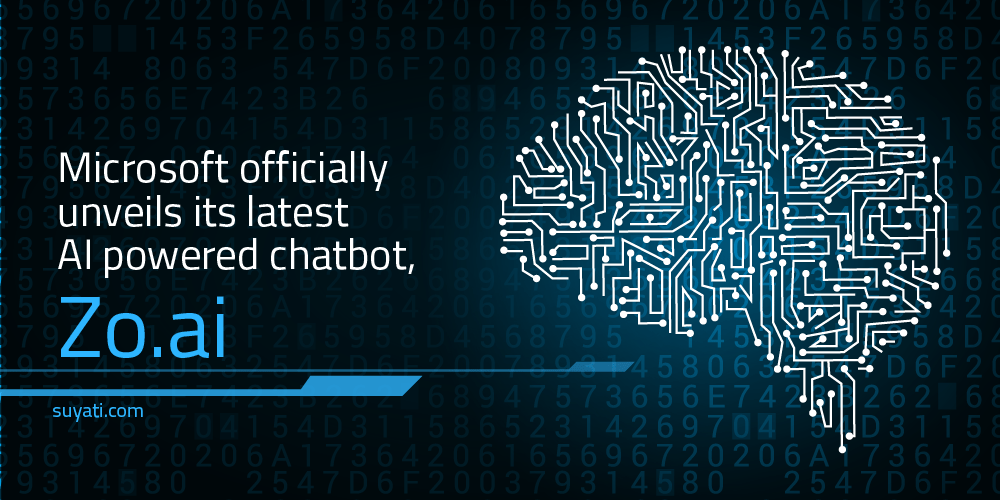 2016 was a fulfilling year for Microsoft, especially with the tech giant expanding its global AI (Artificial Intelligence) footprint. Microsoft is also facing tough competition on AI from its strong rivals like Salesforce, IBM and others. This week, Microsoft is unveiling its new bot – a package of translation and tools tied to AI. Microsoft officially released its latest chatbot- Zo.ai during the AI Day event at San Francisco on December 13th. The Zo.ai is arriving with a new external website which will have information relating to Microsoft’s various AI projects.

Rumors have been around the corner for the past one week that Microsoft is already providing access to Zo.ai for some of its users on Kik. Zo is the successor of Microsoft’s erstwhile Tay.ai chatbot, which was revoked earlier this year due to some unethical practices carried out by certain users. Zo comes with more restrictions and regulations than Tay, as Microsoft doesn’t want to take a chance. Microsoft reports that Zo has procured about 115,000 users, immediately one week after its unofficial soft launch.

The new AI-centered site will function as the single place to access the latest references, resources and other news and updates on Microsoft’s on-going AI related projects, products, and services. Microsoft has also launched the preview of a new Calendar which is designed to exploit the fullest potential of Cortana (Microsoft’s personal digital assistant). Microsoft is trying to make the complete use of Cortana which is very useful in scheduling and tracking meetings.

Some of the most key AI-related areas that Microsoft has played around in 2016 include conversational computing/ bots, digital assistants, cognitive services and expanded intelligence and presence with Cortana. The “Conversation-as-a-platform” campaign that was kicked off by Satya Nadella as part of the Build 2016 event in March ‘16 was spun around the message “human language is the new user interface layer”. During Build ’16, Microsoft also launched the new Bot Framework that allows developers to build text bots as well as bots that interact with users through animations, videos etc. In November 2016, Microsoft also presented a preview of its bot-as-a-service by unveiling the Microsoft Bot Framework for Azure.

The AI Day (13th December 2016) also witnessed Microsoft demonstrating a bot devised to work with Microsoft Teams, the competitor of Slack. This new bot is named as WhoBot which has the capability to identify someone based on the documents they write or the conversations they make. The new Cortana Skills Kit and Cortana Devices SDK will be soon made available to users which will attract more developers to Microsoft Bot.

Of late, Microsoft has launched an open-sourced beta version of its Cognitive Toolkit, which provides assistance with speech, image recognition, and search-relevance tasks. QnAMaker, a new cognitive service from Microsoft is also getting launched soon. Check out our related articles listed below for more details on the above-mentioned products.

A quick glance at the best of Salesforce Winter ’17 release

How Can a Data-driven Culture Help in Customer Experience?