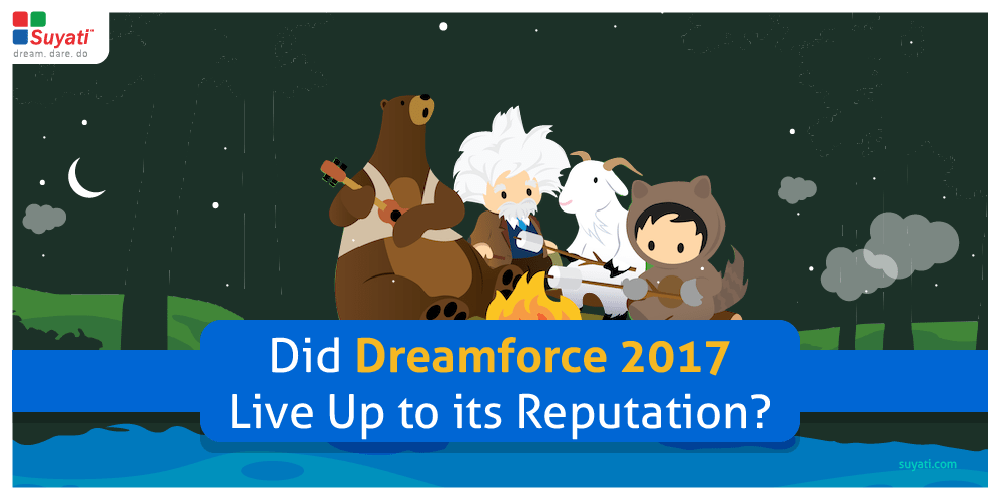 Dreamforce 2017 in a Nutshell

There were no surprises at Dreamforce 2017. The four-day event, held between November 6 and 9, was every bit as fun, exciting, and innovative as expected. The days were packed with keynotes, sessions, hands-on training, and inspirational discussions with some of the world’s biggest stars and much more; while the nights offered ample scope for unbridled fun, entertainment, and power-networking.

Besides the Marquee Announcements

Some of the other top announcements at Dreamforce 2017 include:

These upgrades handle the nitty-gritty and facilitate day-to-day productivity improvements. It is such attention to details, beyond the flashy deadlights that make Salesforce truly stand out and enjoy its rapid rise to the top.

A Hotbed of Innovators

As always, the Cloud Expo witnessed a sea of booths, with top Salesforce customers featuring prominently in the campground. Some of the most famous brands in the world, such as 21st Century Fox, Adidas, Girl Scouts, Citi, KONE, and UCSF use Salesforce to drive their innovation. Dreamforce 2017 offered the perfect stage for such trailblazer brands to demonstrate how they use Salesforce to innovate their way to success. For instance, Adidas CEO, Kasper Rorsted, revealed the new Salesforce CRM powered Adidas app, which aims to offer a premium digital experience to customers, cutting across all touch points.

Dreampitch returned to the Dreamforce stage in 2017, on popular demand. Retrolux, Loop & Tie and Meta Saas, three start-ups built on the Salesforce platform, pitched their ideas in front of the star-studded panel of judges. Loop & Tie, which has the potential to revolutionize corporate gifting, was declared the winner, and took away the US$250,000 investment bounty offered by Salesforce Ventures.

Dreamforce 2017 did not disappoint with keynotes.

In what was one of the most lively and insightful keynotes, IBM’s Chairman, President and CEO, Ginni Rometty, joined Salesforce CEO, Marc Benioff, on stage, to discuss the future of work. The two leaders shared their insights and vision on how data-driven Artificial Intelligence and other emerging technologies will disrupt the workforce.

In yet another emotional and inspiring keynote, actor-innovator, Ashton Kutcher, explained how to defeat some of the most challenging problems in the modern world, by applying technology. As a case-in-point, he revealed how one of the start-ups he co-founded is using technology to fight the trafficking and exploitation of children.

Bill Hoffman of US bank elucidated the deployment of Salesforce Einstein at the bank, along with Predictive Lead Scoring and Einstein Analytics (formerly Wave), to better its customer attrition analysis and retention efforts. The US bank is also using Einstein Discovery (formerly BeyondCore) to understand customer behavior and cross-sell opportunities in a much better way. The company aims to equip its customer-facing financial advisers with Salesforce Einstein, to personalize customer services at scale, and deliver a differentiated customer experience.

Among the other notable keynotes, innovators Paul Daugherty, Liesl Yearsley, Terah Lyons, and Zvika Krieger spoke about the promise of Artificial Intelligence. Mellody Hobson, ranked as of the most influential people in the world by Time Magazine, talked about being color brave. Peter Bouckaert, Human Rights Watch’s Emergencies Director, discussed the Rohingya refugee crisis. Michelle Obama, the Former First Lady, indulged in an exclusive fireside chat with Marc Benioff, discussing her life as a private citizen.

At the Admin Keynote, Scott Luikart, Senior Salesforce Admin for LegalZoom, was awarded the coveted Golden Trailblazer Hoodie for his Trailblazing efforts.

Taraji P. Henson and Natalie Portman, two Hollywood biggies, featured prominently in this year’s Equality Summit line-up. Equality is always a major theme at all Dreamforce conferences, and 2017 lived up to the expectations.

The Trailblazers Basked in their Glory

Dreamforce has always been a venue for delegates to learn new skills from fellow Trailblazers. True to form, several experts offered hands-on training at the Trailhead Academy. Attendees earned thousands of new badges from the Trailhead Zone, each badge representing some new code or skill learned or for passing exams for Salesforce.

Thousands of Trailblazers also embraced the Trailhead ethos of contributing to a cause. During the four day course of Dreamforce 2017, they raised $15 million for the UCSF Benioff Children’s Hospital, and $1 million for Girl Scouts, Upwardly Global and World Vision. Many trailblazers also “gave back” to the community by “donating” their time, packing backpacks for hurricane victims, and in other ways.

Last but not the least, Dreamforce as always ensured a family reunion, providing the perfect stage for old friends to reconnect, to form new friendships, and even for a few marriage proposals! The dust has not yet settled on Dreamforce 2017, and the industry is already looking forward to Dreamforce 2018 with great expectations.

What makes Magento the undisputed leader in B2B e-commerce

Getting your content marketing strategy ready for the 2017 Holiday season

How TDD Can Help Overcome the Most Common Issues Associated...

What a fresher needs is the Basics!

How to Maintain Customer Relationships While Working Remotely