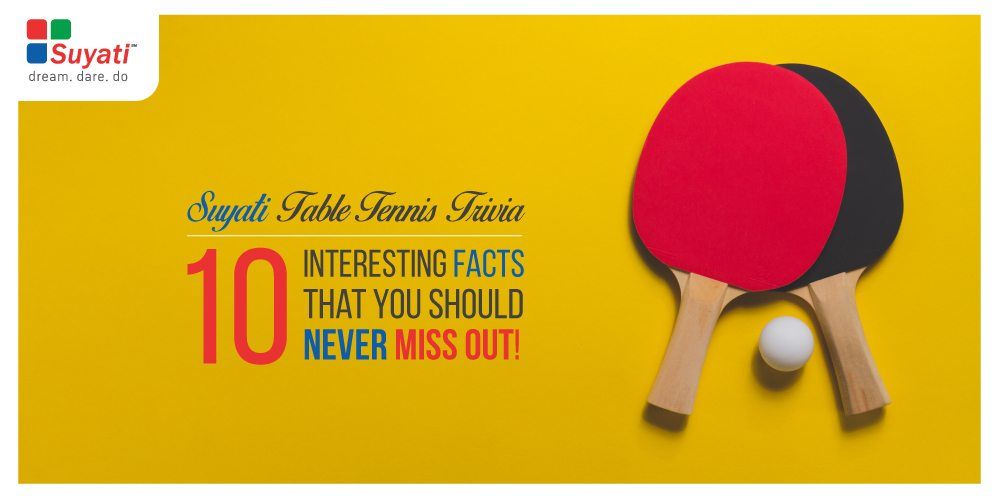 Table tennis is serious business here in Suyati. When our techies get drained from routine tasks and round table meetings, they turn to their next favorite table – the TT table! We have casual and hardcore fans of the game, all really good players, and these days, even our clients love to play a game or two!

Here are some fun facts you should know about the history of Table Tennis in Suyati.

1. The man behind the wheel

Historians of Suyati say that the table tennis frenzy was started as the favourite pastime of none other than our CEO Mukund Krishna himself. The techies eventually followed the merriment, which led to the sport being listed among the annual tournaments in the company.

2. Battle of the grips

At a time when ‘shakehands grip’ was popular among table tennis players, Mukund brought in the underrated ‘penhold style’ which eventually became a trend among Suyatians.

Due to time constraints, initially the rule was that the participants of doubles were not allowed to be part of singles match. But currently the rule has changed and techies are now free to play both doubles and singles without any restrictions.

Unfortunately the undisputed TT Champion of Suyati is one who no longer works for the company. The name Jason was all that was heard when question arose about who the popular and most skilled player is. Apparently, no one ever beat him in singles, and he was known to be the dead end for many opponents, especially Don who always complained on getting Jason as his opponent in the finals! Mukund and Jason were the very first players of Suyati and they led the exhibition match every year as a tradition.

5. The rise of the new champion

Jaseem is the current unbeatable champ of Table Tennis championship who is continuing the legacy of Jason. He is a guy with plenty of tricks up his sleeve, no matter how good the opponent is. Folks here talk about how Jaseem cleverly breaks the opponent’s pattern with a blink of an eye.

Sharafudheen and Sanal came into the limelight in 2014 with a surprise victory beating the “unwinnable champs”. Sharafu eventually became the coordinator of Suyati TT Championship as he continuously won doubles in the following years.

The ladies TT Championship was introduced only last year owing to the increased interest in participation compared to the previous years.

Aparna who won the first ladies’ tournament is someone who regularly plays table tennis with her mom on their dining room table as told by her classmate. No wonder she won like a pro!

The number of participants in the tournament surprisingly soared high this year. Almost 70 energetic techies participated, which is a first in the history of Suyati Table Tennis Championship. Hopefully it will only get better next time!

10. Watch out for these guys on upcoming matches

Suyati TT tournament 2017 stood out for a multitude of reasons, mainly for the number of plot twists that occurred during the game. New joinees Mahadevan and Faiz brilliantly challenged Suyati’s number one players like Jaseem who almost lost his throne at one point! Will Jaseem get to continue his reign for a couple more years? Let’s wait and watch next season!

What can social CRM software help your business accomplish

Five indicators to guide you through the A to Z...

Can we secure the IoT to prevent another cyber attack?